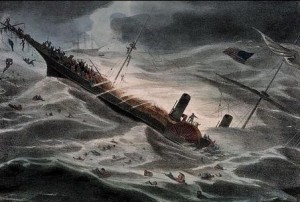 Wreck of the SS Central America

Tommy Thompson revolutionized treasure salvage in 1987 when he and a brilliant team of “high tech nerds” figured out how to retrieve a valuable cargo of gold resting in 8,000 feet of water. The saga of the SS Central America, a paddlewheel steamer that sank in 1857, is packed with as much intrigue as a Clive and Dirk Cussler novel. Pirates, bureaucrats, bankers and monks (yes, those from a monastery) were just the tip of the iceberg of obstacles that loomed over Thompson and his Columbus America Group (CAG).

Why would someone who legitimately discovered millions of dollars worth of treasure aboard what some call a “ship of gold” simply walk away from it? That’s what Thompson did after many years of court battles and bureaucratic entanglements. One of the most sought after “missing persons” on a priority list at the U.S. Marshall’s office, he’s nowhere to be found…along with a vast amount of missing treasure.

More than 25 years have passed since an oceanic engineer from Battelle Memorial Institute raised the cash, rented a boat and engaged the services of a 22-man crew to scour the ocean bottom almost 200 miles from shore. Toting research papers from the 1857 disaster, a probability scale, and a search map designed to cover 1,400 square miles, Thompson boarded a 165-foot former Louisiana oil rig supply boat converted to a support vessel. 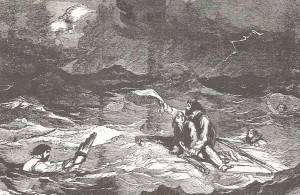 Hardships were encountered from the start: heavy seas, bad weather, and bad food that eventually became no food except for chicken thawed and fried for every meal. Like a scene from the Caine Mutiny, one of the crew members was eating more than his share of the coveted popsicles from the freezer. He was hiding some of them deep inside the freezer beneath the chicken. Ninety degree temps topside spawned dogged work conditions, a yen to pop the popsicle thief and a strong desire to return home.

Forty days into scouring deep waters on the far side of the Gulf Stream—at a cost of $20,000 a day–the sonar “fish” sent up a graphic image. A mast, timbers and what appeared to be the remains of a ship’s sidewheel jutted out of a debris field that looked like a junkyard. The high tech nerds had discovered their “ship of gold.”

The 280-foot side-wheel steamer SS Central America was loaded with newly cast gold bars and coins from mints in San Francisco. It’s route to New York was a regular one. The gold shipment and hundreds of passengers boarded the vessel in San Francisco bound for the west coast of Panama. Here, they traveled by rail to Aspinwall on the east coast where Capt. William Lewis Herndon settled his guests aboard the mid-19th century wooden hull vessel, made a stop in Cuba, and set out for the five-day journey to New York. 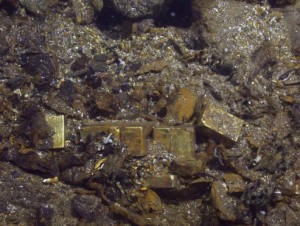 Most of the passengers were in good spirits. It was September 8, 1857, the height of the California gold rush and many had their money belts, trunks and carpetbags stuffed with gold dust and shiny nuggets. Festivities ceased after four days at sea when a category two hurricane engaged the vessel with fierce winds and heavy seas. A leak in one of the seals between the paddlewheel shaft and the side of the ship shut down the boiler. With the fire out, steam pressure down and the bilge pumps failing, the 750-ton steamer bobbed around like an apple in a barrel. As hope waned aboard ship, the captain of the Marine, a two-masted brig transporting molasses from Cuba, spotted the foundering vessel and rescued 148 passengers, mostly women and children. Four hundred and twenty-three passengers and crew were lost in the worst maritme disaster of the time.

After the sonar detection, CAG was granted an Admiralty claim for ships lost in international waters where the team was working in deep water, 160 miles southeast of Charleston, South Carolina. A remote operated vehicle (ROV) nicknamed Nemo searched the bottom with a bucket and claw seeking proof that this truly was the Central America. After what seemed like an endless quest over thousands of targets in the debris field, the sonar sent up a crowning image. Thompson found the ship’s bell and Nemo retrieved it.

This was proof enough for the federal judge to grant the group 92 percent of any salvaged treasure. Soon, like caterpillars bursting out of cocoons, claimants emerged en mass. All but eight of the 39 insurance company claims were dismissed along with petitions from rival salvors. The Capuchin Monks’ plea declaring that salvor Jack Grim gave them salvage rights was rejected along with petitions from two universities. 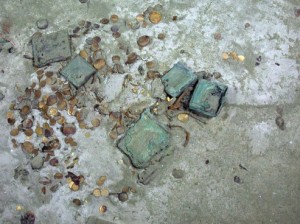 CAG recovered three tons of gold coins, bars, dust and nuggets valued at $40 million. Some of the hundreds of $20 gold eagle coins, fresh from the San Francisco mint, fetched $10,000 each. One of the gold bars weighed 62 pounds. Salvage was suspended when the insurance companies appealed and the court reversed its decision. Everything remained in limbo until 1993 when rights reverted back to CAG in exchange for additional profits for the insurance companies.

Thompson never shared the wealth with his 160 backers, many of them from his hometown, Columbus, Ohio, who believed the ship of gold would make them rich. Thompson claimed the $2 million he got from the sale of hundreds of coins was spent on legal fees and bank loans. Investors responded by slapping a law suit on him, but by 2000 he had sold over 500 gold bars and thousands of coins to a California marketing group for $50 million. He fled when a warrant was issued for his arrest. By 2006, the one time American high tech hero was divorced and living with his girl friend in a mansion near Vero Beach, Florida, but they were long gone by the time U.S. Marshalls arrived.

Through 2012 summons continued to be sent out, but reverted to the court. Similar to  eccentric recluse Howard Hughes, Thompson vanished with only rumors of his whereabouts popping up sporadically. This prompted the court to finally appoint a new “salvor-in-possession.” The most likely and legitimate entity to take on the project has a fitting name: Odyssey Marine Exploration. Homer’s epic poem focused on hardships and adventures, high points in CAG’s attempts to salvage what some call the “billion dollar treasure.” Odyssey, a Tampa, Florida, based deepwater shipwreck discovery group, has an impressive record going back to 1994.

Percentages of recovery proceeds for the salvors, insurance companies and investors were worked out well in advance. The contract was awarded in March, 2014 and by the end of April, Odyssey had recovered 3,000 gold coins and 45 gold bars. Like the legendary Phoenix, the treasure of the Central America is rising again. An eminent Odyssey on the horizon, the ship of gold sails on with high hopes for the future.