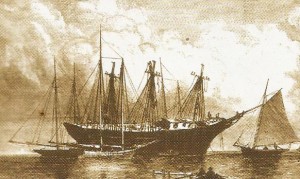 A ship in Key West Harbor similar to the Isaac Allerton.

When my friend, Rick Shipley, returned to Maryland after attending a wedding in Florida, he thanked me for urging him to visit the Key West Shipwreck Treasure Museum. One of the city’s many Historic Tours of America attractions, the interactive nautical museum features exhibits, films, actors and artifacts spanning 400 years of shipwrecks and salvage in the Florida Keys.

I was elated when Rick described some of the vast collections of artifacts salvaged from the Isaac Allerton, a three-masted bark that sank during a hurricane in 1856. This wreck is special for me. I dove on it in 1987 with Ray Maloney, a local diver who had discovered it two years earlier. With no formal academic background, he studied archaeological methods and techniques in an effort to obtain an Admiralty claim on the ship from the state of Florida. When Malone’s research revealed family ties to the wreck, officials were impressed and granted him the claim and sole access to it. His great, great, great grandfather, Walter C. Maloney, was an attorney who represented the wreckers in salvaging the Isaac Allerton. 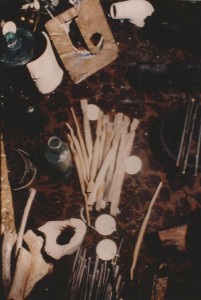 Ivory handled toothbrushes with hog bristles, a bottle, slate pencils, animal bones, part of a smoking pipe, and other artifacts.

The story of wrecking is part of the museum tour depicted by actors in period costume and enhanced by a film. Many of the sailors of Key West were wreckers who saved lives and salvaged cargoes. The U.S. government established a special court to award wreckers a percentage of the cargo’s value depending upon the danger involved and the effort required to salvage it. The museum dispels the myths of wreckers as unscrupulous rogues who lured ships on to reefs by flashing lights that resembled lighthouses. This supposedly tricked the captains who sailed in closer and ran aground. Wreckers actually used towers to watch for ships in distress and the museum’s reproduction of one is a highlight for visitors who wish to climb it. The coral reefs and Key West’s 100-square-block historic district are in full view from the 65-foot-high roost.

The Isaac Allerton was an authentic merchantman carrying one of the largest cargoes of the 19th century. Many items were to be shipped overland to pioneers in our country’s western settlements. Shifting sands and poor visibility on Washerwoman Shoals—15 miles west of Key West—hindered salvage efforts. But wreckers did recover $97,000 worth of cargo (only 20 per cent all told) which was sold at public auction. Most of the artifacts from the Isaac Allerton are typical of 19th century necessities, such as school slates, ink wells, whale oil lamps and clothing. Bottles of Irish whiskey, sarsaparilla and Mexican liniment line the exhibit cases next to ivory-handled toothbrushes with hog bristles, brass candleholders and English porcelain. According to the manifest, the wreck was identified by large blocks of marble that were requisitioned for the new floor of the U.S. Customs building in New Orleans. The museum’s collection features several large sections of the marble including a one-ton slab on display outside. 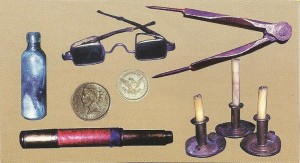 Captain Baldwin’s personal belongings found in an area identified as his cabin.

The two floors of the museum, modeled after wrecker tycoon Asa Tift’s warehouse, also hold treasures from the Spanish treasure fleets. Guests are invited to lift one of the hefty silver bars salvaged from the Spanish galleon, Nuestra Senora de las Maravillas. This is just one of many hands-on displays.

The museum is located at One West Whitehead St. near Mallory Square. For further information go to: keywestshipwreck.com.