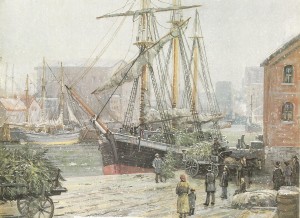 Trees being loaded aboard ship. Painting by Charles Vickery.

During the holiday season, your spouse might utter these words: “Don’t forget to water the tree!” This annual mantra is enough to compel families to visit Home Depot where they could purchase an artificial Christmas tree. But for divers who are familiar with the wreck of Lake Michigan’s Rouse Simmons, watering the tree, better still “trees,” remains an anomaly. The cargo of 5,500 trees went down with the ship more than 100 years ago.

The ship and circumstances leading to its demise became one of the most intriguing yet sad tales of Great Lakes lore. Not just the story of another storm, it remains an epic tale of a holiday ritual that went awry when Capt. Herman Schuenemann took a chance in bad weather. He had sustained the journey from Manistique, Michigan, to Chicago many times. Although the weather wasn’t bad when he left port, it remained “stormy November” when anything could turn up.  He had two valid reasons for the trip. First he was in debt for over $1,000 as one of three owners of the vessel and second, he was welcomed at dockside in the lucrative Chicago market, where the average tree brought one dollar. He gave many away to the poor who named him Captain Santa.

December was one week away and Schuenemann was fearful the northern Michigan evergreens would lose their value if they weren’t delivered soon. He ordered the crew to lower 5,000 trees into the hold and secure an additional 500 to the deck, then set sail November 23, 1912. As the ship sailed past Schuenemann’s hometown of Algoma, Wisconsin, a blizzard was brewing.  Witnesses from shore later recalled the 123-foot schooner sitting lower in the water than usual as the snow and ice caked the on-deck trees. 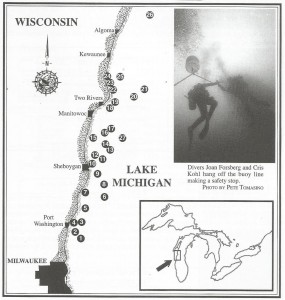 Approaching Kewaunee, the captain sent up a distress flag when his ship started to list. A crew at a nearby lifesaving station spotted the signal and launched a rescue boat, but a sudden squaw forced them to turn back. When the snow cleared, the Simmons had disappeared on the horizon. All 17 hands were lost and no records were found to show where it went down. Divers searched for years, but never found it…that is until Kent Bellrichard arrived on the scene in 1971.

A seasoned Great Lakes shipwreck diver, Bellrichard was searching for another vessel when he came upon the Simmons. “I knew immediately what it was,” he said. “The trees were skeletal, but still stacked on deck and in the hold. Visibility was good and I got a clear view of the entire structure as I swam over and around the wreck as it sits upright, bow pointing north. The captain might have steered his ship in that direction to try and seek safety along the Kewaunee shoreline.” 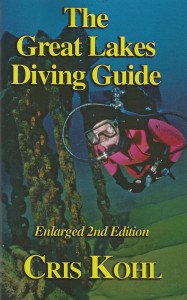 Other divers have since visited the remains. Although the ship’s wooden deck has collapsed, the hull remains intact, but everything is covered with zebra mussels. Divers descend 140 feet to the deck and 25 feet more to the bottom. Keen eyes can pick out the windlass, deadeyes, pans, dishes, chains, broken masts and the rudder post with a centerboard. Some of the trees washed ashore but there are plenty left for aspiring photographers to shoot. Cris Kohl, author of The Great Lakes Diving Guide, took some outstanding shots of the wreck which are published in his book. Visibility averages 50 to 60 feet and usually there are no currents to deal with. Water temps range around the mid-40s F. Artifacts recovered from the wreck are displayed in exhibits at the Rogers Street Fishing Village Museum, Two Rivers, Wisconsin.