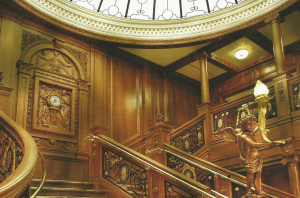 Nestled not far from the foot of the Smokey Mountains, a replica of an enormous ship faces The Parkway looking for all the world like it’s ready to set sail into the steady traffic cruising through Pigeon Forge, Tennessee.

As they board, passengers see lifeboats lashed in tightly above first class cabins near the bow. Above them, one of four majestic stacks stands tall as if ready to belch smoke before embarking on a voyage that will launch the travelers back in time…to April 15, 1912. That’s when the 883-foot White Star liner—sailing from Southampton, UK, to New York—suffered one of the most tragic voyages in maritime history. 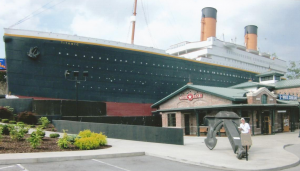 Jeff Thomas, ship manager on duty in full uniform, hands my wife, Cathy, and I our boarding passes. We take on new identities and become two of the 2,229 passengers and crew. When we exit, we’ll check a list that chronicles the names and fate of all aboard. I’m Second Class Officer Charles Lightoller and Cathy is two-year-old Hildur Hirvonen from Finland. Her father found work in Pennsylvania and she and her mother were crossing the Atlantic to join him. With passes in hand, we glance at “The Final Farewell,” a mural by artist Ken Marschall portraying the Titanic as is steams out of port before a blazing sunset.

Our first encounter was a striking cutaway of the ship. Like a dollhouse, it depicted every detail including staterooms, dining areas, salons and other accommodations… including the over-crowded steerage section. We pushed a button and listened to a description of the ship’s trials and tribulations during three years of construction. A long, curving wall serves as a timeline. Under “Titanic’s Maiden Voyage,” it features the time the vessel struck the iceberg: 11:40 p.m., April 14 and when it went down: 2:20 a.m., April 15—two hours and 40 minutes from beginning to end.

We paused by a mock-up of one of the ship’s boilers where I took a shovelful of coal and tossed it into a fiery replica. The coal is authentic, some of the 5,892 tons stockpiled for the journey. A storyboard tells the tale of fireman John Podesta who took a break away from the boiler room to grab a bite in the crew’s mess hall. That’s when he heard a cry: “Ice ahead Sir!” If Podestra had been on duty, he would have heard the automatic watertight compartment door slam shut trapping him in the boiler room. He was lucky on two counts….he survived the sinking 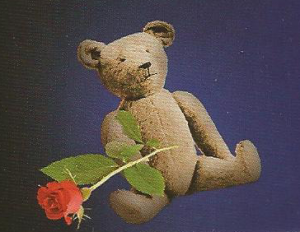 The Gattie Bear is an original artifact.

Of the many museum exhibits, the Gatti Beer display is most touching. Luigi Gaspare, director of the ship’s restaurants, was given a Merrythought Soft Toy Company Good Luck Gatti Bear by his son before he left. The small keepsake was found tucked into a tobacco pouch tied to his trousers when his body was recovered from the freezing waters. The UK’s Merrythought Company manufactured 5,000 Gatti bears, but only a small number of them are still in circulation. The bear on display is an original artifact.

Not far from the Gatti display, a dramatic scene unfolds behind heavy glass doors. Visitors watch a steady stream of water flowing along a corridor and down a flight of stairs, a realistic rendition of what passengers encountered as the ship foundered.

Officer Ron Klynstra greets us at the base of the grand staircase, the elegant focal point of James Cameron’s epic production, Titanic. He recaps some of the highlights of the staircase including the one million dollar price tag for reconstructing the striking walnut and oak attraction. A carved wooden pineapple at the base of the banister signifies “welcome” and a centerpiece clock mounted halfway up the stairs adds to the posh decorum that made this the fanciest ship in the White Star fleet.

Of the many galleries opposite the staircase, one is so realistic it seems like a posh living room has been uprooted from land to sea. A first class sitting room, it’s pleasantly furnished with a stylish divan, easy chairs, a desk, fireplace and walnut breakfront. There’s no doubt this lap of luxury provided a pleasant social setting for some of the wealthier passengers. 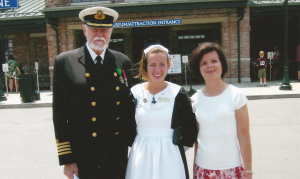 Officer Bob Thone escorts us to the “Hollywood Scene,” glittery showcases devoted to Cameron’s production. A case of Oscars complements a storyboard of 100 photos portraying many dramatic scenes from the film. A sign reminds us that in 1997, this set was the largest one ever constructed in the motion picture industry. Another case holds Lecoeur de la Mer, the blue sapphire pendant that inspired the Titanic love story.

Nearing the end of our journey we watch as kids at the Children’s Exhibit steer a miniature ship’s wheel, climb into a lifeboat, and learn to tie knots. We watched them have a rollicking time as they tried to walk on each of three small decks angled at 12, 35 and 45 degrees. There was no better way to experience the gradual listing of the ship’s decks that created steep slopes and impeded a path to the lifeboats.

At the bridge we encounter a full scale steering wheel, the telegraph and command center. A picture of an iceberg appears through the window and a chilling experience awaits behind a door nearby. Gently opening it, we immediately interact by touching a solid wall of ice…a palpable iceberg! Dipping our fingers into an attendant pan of water simulates what it would be like immersed in the 28 degree seas.

Serendipity accompanied us at the end of our journey. We glanced at our passes and checked the directory. We both survived, yet 711 others did not. Our second surprise was meeting the captain! Lowell Lytle is the spitting image of the ruggedly handsome Capt. E.J. Smith: white hair, piercing blue eyes and a neatly trimmed beard. Standing in front of the Grand Staircase, Lytle captivates audiences with thrilling accounts of benevolence and heroism during the vessel’s last hours afloat.

A native of Grand Rapids, Michigan, Lytle has played a convincing role as skipper of the White Star line for 15 years. We were fortunate to catch him during one of his summer appearances at Pigeon Forge. He appears at Titanic presentations around the world: Singapore, Shangri, Canada, UK and the U.S. His poignant and authentic talks are a fitting culmination of our voyage accompanied by a signpost that reads: “Our Titanic Museum Attraction in Pigeon Forge is a tribute to the ship, passengers and crew. It is said, ‘The best way to respect and honor those who gave their lives is to simply tell their stories.’ The deep-sea is the earth’s biggest museum, yet there is no lock on the door.”
For further information visit: TitanicPigeonForge.com.