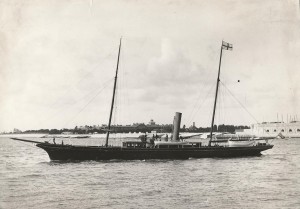 Take one lavish 200-foot steam yacht built in 1881 for a prominent English playboy. Let her stew from lack of use for two years, then steam her right into the British Royal Navy to become the flagship for the admiralty commanding Portsmouth.

Baste her with 40 years of service and then transfer her to Nassau in the Bahama Islands as a lighthouse tender. Let her simmer and sail in clear waters for seven years and then knead her through rough seas until the late 1930s. Finally, run her aground on a shallow reef off Nassau and allow her to marinate until she can be sunk to prevent a navigational hazard. Then what do you have? Ready to serve: an adventure on a shipwreck that has appeared in Seahunt, Flipper, Voyage From the Bottom of the Sea and Thunderball. 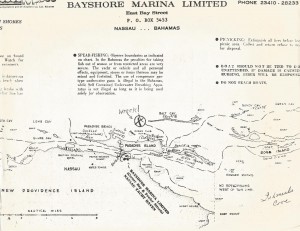 Resting in 30 feet of water less than a mile off Paradise Island, Nassau, the ship is scattered about, coral covered and captivating. Call her what you will: Candace, Firequeen, Firebird or Bahamian—she sailed under all of these names at one time or other.

In the beginning, a crew of 17 sailed the twin-masted, single-funneled beauty, Candace to first place in the International Regatta for Steam Yachts at Nice, France. Two years later, when the owner grew ill, he sold his yacht to the British admiralty where she became the Firequeen, a sound and seaworthy vessel that put steam into the UK fleet.

In 1920, after 40 years of faithful service in the British navy, the Bahamian Board of Trade acquired her for use as a lighthouse tender in Nassau and dubbed the vessel Firebird. After serving seven years, she was released from duty and lay idle at her mooring until purchased by a local merchant who chose a new name, Bahamian.

Reduced to a plain, general cargo ship, her stately masts were chopped off, while peeling paint and rust appeared on the hull. Finally condemned after eight years of service, the failing derelict had one tune of glory yet to play. Tied to the wharf, waiting to be stripped of her engines and fittings, the dock master received a call that nearly 100 Bahamians were marooned on a small island 20 miles away. They were awaiting rescue from a hurricane with raging winds heading their way, but none of their small boats could hold more than a dozen people. 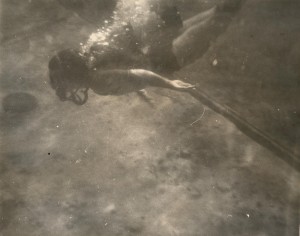 The captain of the Bahamian was summoned and quickly assembled a crew, cranked up the engines and headed into rough seas hoping the old vessel would hold up for one more voyage. It was a rocky trip, but the seasoned craft made it safely to the island, loaded everyone aboard and made it safely back to port.

Engines, boilers, hatches and deck plates continue to provide backdrops for film makers on a wreck whose history is as good as any of their story lines.