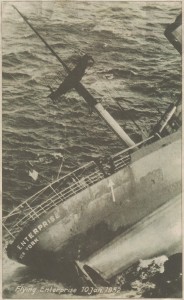 Among the many maritime yarns recounting heroic deeds of masters and their vessels is the extraordinary tale of Henrik Kurt Carlsen, better known as Capt. Stay Put.

Although Carlsen, the 37-year-old Danish American skipper of the SS Flying Enterprise didn’t coin the phrase, ‘Don’t give up the ship,’ he surely abided by it. When his vessel, a 6,700-ton merchant freighter owned by a German company, left Hamburg for New York in late December, 1951, the dense fog didn’t faze him or his crew.

The weather cleared outside the English Channel and until the seventh day, nothing suggested that the vessel faced anything other than a routine crossing of the wintry North Atlantic. That’s when one of the worst storms in 20 years hit the Flying Enterprise with fierce winds and 50-foot-waves. 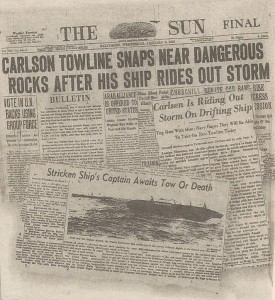 Newspapers throughout the world followed the saga of Capt. Stay Put, a model of courage and self-sacrifice.

Carlsen sent an SOS when the heavy cargo–furniture, cars, coffee beans and pig iron–shifted and ripped holes in the keel. Meanwhile, two merchant vessels responded to the distress signal, but couldn’t get close enough for a rescue.

As the massive hull started to list, the captain ordered his crew and 10 passengers to abandon ship, while he remained aboard. One life was lost as the rescue ships picked up the survivors. Carlsen, firmly believing his ship could be salvaged, waited for a tugboat to arrive the next day. He was now on what one newspaper reported: “an endless voyage.” 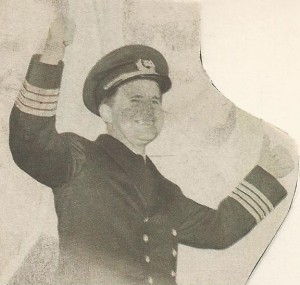 Aptly named the Turmoil, the tug maneuvered skillfully enough in the rough waters to secure a towline to the 395-foot-long freighter. The plan was to tow it back to port, but with the whole world now waiting and rooting for Capt. Stay Put, the best laid plans of skilled seamen failed when the line broke. In three days, the crippled Flying Enterprise and its escort had covered two-thirds of the distance to Falmouth, but had to give up when they were 40 miles offshore. The merchant ship was sinking. When it started to roll, Carlsen leaped into the icy waters and swam to the tug. Forty minutes later he watched as his ship went down. 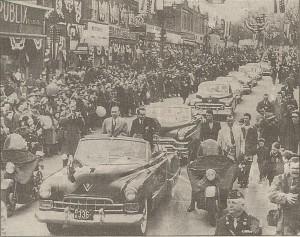 Heralded throughout the world for his grit and game, the courageous captain appeared in a ticker-tape parade on Broadway, but turned down all offers for fame and fortune. Henrik Kurt Carlsen, forever known as Capt. Stay Put, remained a model of courage and self-sacrifice as he commanded ships for another 24 years. He “crossed the bar” in 1989 at the age of 75.

High tech divers from Italy, Denmark and the United Kingdom salvaged some of the cargo from the wreck that rests in 280-feet of water. Its location, in a heavily trafficked sea lane on the western approaches to the English Channel, make salvage a hazardous operation. Details of the salvage and the story of the Flying Enterprise were featured in a 2005 PBS episode of the History Detectives.