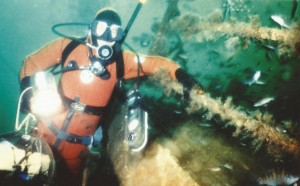 What would you do if you discovered a ship that sank in 1888 loaded with china dolls, cut glass, brass fittings and other cargo destined for New Orleans and the Western Movement of early settlers in America? You might want to shout, “Eureka! I’ve found it!” But Capt. Mike Boring of Virginia Beach, Virginia, didn’t shout for joy until later when he found out his virgin wreck was the Eureka, an American schooner that collided with the British steamship, Benison, 58 miles southeast of Cape Henry, Virginia.

With help from Bill Hughes of State College, Pennsylvania, Boring pieced together the fascinating history of the four-masted, square-rigged ship whose massive single cylinder reciprocal steam engine rises 20 feet off the bottom from depths of 95 to 115 feet. Built in Philadelphia in 1884, the Morgan Line schooner was agile and economical, plying the waters for four years between New York and New Orleans. It was on this route in a dense fog that the Eureka took a severe hit on its starboard side from the Benison whose captain had ignored the navigational Rules of the Road. When his ship caught fire and started to list, Capt. Robert Quick ordered all hands to the lifeboats. As the fog lifted, they watched the steamship, Hudson, whose lookout spotted the ships in distress, tow the Benison away. Another vessel, the Carolyn Gray, was sailing the same route and rescued the captain and crew of the doomed vessel. Fortunately, there were no causalities. 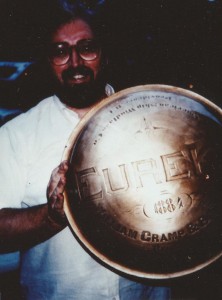 Had it not been for Capt. Robert Hollowell, a commercial fisherman and friend of Capt. Boring’s, the Eureka might still rest undetected on the bottom of the ocean. “I’ve been on most of the Virginia Beach wrecks,” Boring said, “so I thought I’d check out my friend’s loran numbers that identified an underwater obstruction. I had no idea I would find a 350-foot 19th century schooner with much of its cargo intact.”

Research revealed that commercial hardhat divers from a salvage company in Norfolk retrieved some barrels of flour from the forward hold, but little else. The Atlantic Mutual Insurance Company paid a $160,000 claim to the ship’s owners. The divers, not interested in the remaining cargo, dynamited the masts to clear the area for safe navigation. Boring and his buddies used ping-pong paddles to fan the sand and uncover their elusive “treasures.” 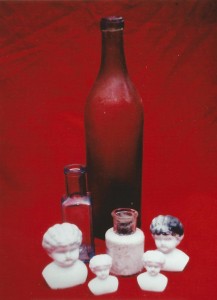 Boring compared it to diving in a general hardware store at the turn of the century. Ax heads, tools, grindstones and fire hoses with brass fittings were some of the first discoveries. Then came dinnerware, cut glass inkwells, tea sets, shoes, a gold watch and bottles of cognac. But the best came last: hundreds of arms, legs and heads of china dolls, all clumped together in the sand, their wooden crates rotted away. These late 1800 china dolls were put together in homes of the early settlers who used needles and thread to sew the parts on a muslin body that then became a finished doll ready to costume. The collectible doll parts helped shed light on the age of the ship later identified when Boring discovered the brass capstan cover with the ship’s name and builder on it.

Bill Hughes sums it up best when he says, “Diving the Eureka is like going back in time and rummaging through a combination hardware, department, liquor and toy store. The best part is toasting to our day of shopping with a glass of 122-year-old cognac.”