Shipwrecks Of The French West Indies 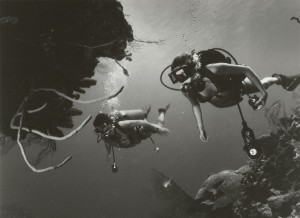 Divers Descend on Wrecks in Bay of St. Pierre

Ou est mon petit punch? (Where is my small glass of punch?). This is the only French you’ll need to know when visiting the French West Indies. The drink is a welcome gesture—a scintillating rum concoction that bridges the gap in foreign relations throughout these isles of the Lesser Antilles. And surprisingly, few Americans have made the French connection to some of the best shipwreck diving in the Caribbean.

The sleepy little town of St. Pierre, fifteen miles north of Fort de France, Martinique, was just another dot on the map until May 8, 1902. That was its day of infamy when 29,000 residents died. Disregarding warnings that the neighboring volcano, Mt. Pelee, might erupt, people went about their business as usual. But at 7:50 a.m. a hail of fire, red hot stones and scalding mud rained down upon the town and its seaport. Flames danced upon waters fed by thousands of gallons of rum from the distilleries on the shoreline. Fire engulfed twelve vessels tied to the wharf and anchored in the bay, creating an underwater graveyard: The Shipwrecks Of St. Pierre.

My heart is pounding as I leap into the Bay of St. Pierre and follow divemaster Lionel Lafont down the anchor line. At 120 feet the bow, big, dark and menacing, looms before us. At 160 feet, I can almost reach out and touch the coral covered foredeck as we make our way to the break at midship. The RORAIMA, a 328-foot-long steamer, sits upright on the bottom, broken in half, but with all the earmarks of a ghost ship underway. Her cargo holds still embrace lumber, light fixtures, kerosene, machinery and other freight that never made it ashore. As we swim through the upper level of the engine room, Lionel points to a valve and whistle and then to a staircase that leads down to the boiler room—a foreboding dark pit. He beckons and I follow him through an open window leading to the stern. We turn sharply toward a catwalk railing and glance down at the ship’s funnel, resting in the sand 20 feet below us. A hogfish and rock beauty welcome us back to the anchor line where we begin our ascent and decompression stops. 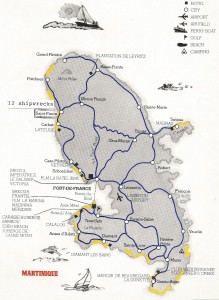 The RORAIMA, sunk in the northern part of the Bay, is only 700 yards from shore. It takes only five minutes to reach the wreck, and not much longer than that to anchor over other wrecks nearby. The DIAMANT, a tugboat sunk in 100 feet of water, cuts a path of twisted stanchions, ribs and cables across the bottom to places where blennies and hamlets hide in cracks and crevices. A barge being towed by the DIAMANT rests nearby. The GRAPPLER, a cable repair ship and one of the first to sink after Pelee erupted, rests at 100 feet, no longer able to link the town to the world by telegraph. The TERESA LOVICO, a two-masted sailing vessel loaded with building supplies, is perched on a slope 120 feet deep. The GABRIELLE, a three-masted general cargo ship, rests in 115 feet of water, its decks caved in, but its bow still intact. The CLEMENTINA, ANNA MORSE, TAMAYA, KORONA, SACRO CUORE, all sailing ships or steamers with storerooms full of sugar cane, rum, hardware and general stores, also rest quietly in the graveyard.

The late Capt. Jacques Cousteau, who spent two weeks diving these wrecks, called St. Pierre one of the seven wonders of the underwater world. Today, the port town and its many wrecks are emerging as a dark horse for la bonne vie sous la mer (the good life under the sea). If you’re a cosmopolitan traveler seeking new and exciting dive sites accompanied by charming traditions and customs of other countries, you’ll fit in well to this little corner of France in the Caribbean.