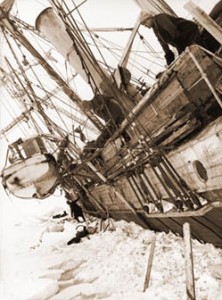 Is there an I-max theater near you? If so, don’t miss Shackleton’s Antarctic Adventure on the five-story Imax Theater screen. Billed as a sensory-immersion experience, the film chronicles Commander Sir Ernest Shackleton’s 1914 attempt to lead a 26-man British team across the Antarctic continent.

In 1913, Shackelton advertised his expedition in the British newspapers: Men wanted for hazardous journey. Small wages, bitter cold and long months of complete darkness. There will be constant danger and a safe return is doubtful. Looking for the bravest of the brave. There will be honor and recognition in case of success.

Thousands of men replied to the ad, all seeking an opportunity to join the Imperial Trans-Antarctic Expedition, a complete on-foot crossing of the ice-bound continent. Among the engineers, physicists, geologists and others on the voyage was Frank Hurley, a cameraman who shot 35 mm footage of the team’s legendary struggle to survive. Some of Hurley’s shots—a riveting part of the Imax presentation—show the ship being crushed by the ice floes and breaking apart as the men abandon it. 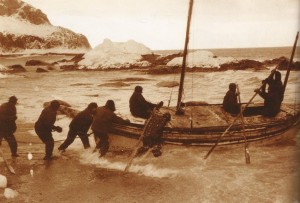 The Endurance, stuck in the ice for nearly 11 months, sank in October, 1915. Shackleton, realizing his men couldn’t walk to Elephant Island, 350 miles away, ordered them to camp on the ice and wait for the spring thaw. Five months later, after enduring blizzards, gales and minus 50-degree temperatures, three lifeboats were launched and deployed through narrow water lanes in the ice pack. It took one week of strenuous rowing to reach Elephant Island where camp was set up on the rocky shore of a secure cape. 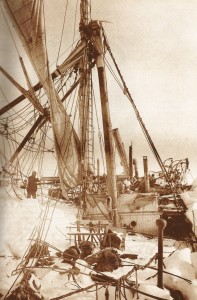 It was the first time in nearly a year and a half since the men had set foot on land. Safer now, but not out of danger, they rested and dined on seals and penguins. They used blubber from the flesh of seals to fuel their stoves and built crude housing from upturned boats and boulders. They were surviving, but not without Shackleton’s constant encouragement. He instilled his optimism in others and inspired confidence when things looked bleak. Defeated in his goal to cross the continent on foot, the inspirational commander was determined to bring his men back alive. He knew this new found sense of security wouldn’t last long and announced that he would attempt to reach a whaling station at South Georgia Island, 800 miles away. Shackleton and five volunteers took the sturdiest boat and sailed for 17 days through storms that spawned howling winds and blinding snow. When they reached the island, the weary voyagers climbed the mountainous terrain and made their way to a Norwegian whaling station. Bathed and nourished, Shackleton made immediate plans to rescue his men.

With help from the whalers, the commander was successful in his fourth attempt to return to Elephant Island. All of the crew survived the two-year Antarctic adventure. Shackleton was elated when he was greeted by his men on the beach and one of them said: “We knew you’d come.” 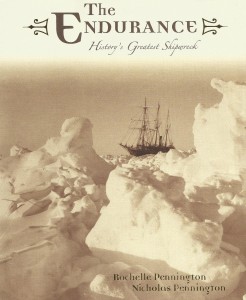 David Mearns of West Sussex, United Kingdom, heads Blue-Water Recoveries and endorses expeditions to exciting places. He is planning to search for the Endurance as soon as funds are available to hire the ice-breaking research vessels necessary for such a quest. Stay tuned for future news. For more information, visit main.wgbh.org/imax/shackleton or write to David Mearns at david@bluewater.uk.com. For an excellent read with authentic photos, get Michelle & Nicholas Pennington’s book, The Endurance: History’s Greatest Shipwreck, Pathways Press, 2007