The Christena: A Sad Caribbean Saga 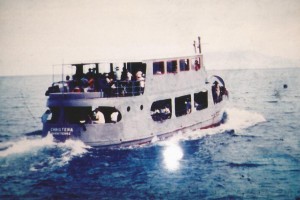 Visiting the M.V. Christena is a somber experience, but divers from the Caribbean islands of St. Kitts and Nevis conduct a yearly memorial  to honor those who were lost in its tragic demise.

The passenger ferryboat sank in the Narrows–a thin strait between the islands–on August 1, 1970 when the captain failed to close the vessel’s watertight doors. Workmen had been repairing the propeller shaft below decks and they assumed the captain would make a final check before departing St. Kitts for Nevis. Designed to carry 180 passengers, the boat was overloaded with 300 happy people heading for rural Nevis on a holiday celebration.

Not long out of port, the ferryboat started to capsize and the captain turned his vessel sharply toward shore in an attempt to run it aground. But the bulky, top-heavy boat  capsized quickly. Fishing boats and pleasure craft came to the rescue, but only 91 passengers and crew survived. 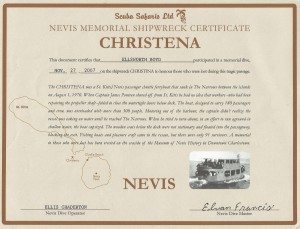 A dark shadow suddenly appears in the clear water as divers approach the wreck. Sitting upright in the sand at 70 feet, it looks like a vessel underway. Dense marine growth covers the boat, enhanced by small lacy hydroids that resemble Christmas tree decorations. A bay window where passengers once sat to enjoy the seascapes is now just a big gaping hole. Juvenile dog snappers and dusky damselfish peck at algae covering hundreds of bottles scattered throughout the wreck and in the debris field. A child’s toy, a portable radio and strands of wire rest in the shadows near skeletal remains. 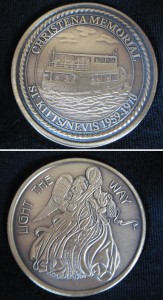 Inside the wreck, spiny lobster feelers poke out from beneath wooden bunks that are near a head and wash basin. Clown wrasse and spotted gobies swim in and out of empty cargo holds. The roof of the upper deck has weathered away, revealing steel ribs covered with small clumps of brain coral. Juvenile tangs slip out of the shadows at the keel and cruise over the debris field where a woman’s pocketbook, a child’s shoe and the boat’s ship-to -shore-phone are strewn.

The Christena is a protected marine memorial park and sanctuary that warrants dignity and respect to those who were lost in the disaster. Ellis Chaderton of Scuba Safaris Ltd., Oualie Beach Hotel, presents a memorial shipwreck certificate to divers who visit this shrine. There’s also a memorial coin available in his dive shop at the hotel.

For more information go to scubanevis.com.