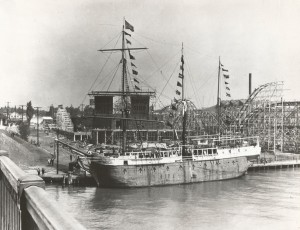 George Wellington, a convicted pickpocket, embezzler and burglar was tied at the waist by a heavy rope and lowered into the foul smelling hold of the ship. It was the same way animals were loaded in the early 19th century. The Englishman’s treatment wasn’t much better than the pigs and sheep aboard the Success, one of many vessels in Australia’s “felon fleet.”

These convict ships were floating prisons that housed hardened criminals deemed hopeless for rehab and unworthy of doing time in their homeland jails. Australia was the United Kingdom’s New World and needed construction workers designated as “indentures” in its Down Under colonies. When the ship landed, the convicts became the custody of the governor who set up a penal colony that was a piece of cake compared to the suffering they endured in the 100 to 130-day voyage from England to Australia.

The Success, which later became a lucrative tourist attraction and a Great Lakes shipwreck, was typical of the fleet that carried the banished exiles. Some of the ships were owned by England, while others were chartered to deliver prisoners to the colonies. The ship’s masters and guards were subject to little English law once they left port. Thus they became, in many instances, seagoing torture chambers.

Between 200 and 300 convicts were housed below deck in cramped quarters. Hammocks and bedding were provided for those who followed the master’s strict rules, but a dark cell dubbed the “black hole” awaited violators. Convicts were manacled and chained for the slightest provocation and the whipping post awaited troublesome knaves and slackers.

There were frequent floggings with a cat-‘o-nine-tails, a whip with nine lines at the end, each containing three or more knots. Cruel masters and harsh discipline were handed out under deplorable conditions accompanied by outbreaks of scurvy, dysentery and typhoid. In the beginning, about 1788, frequent loss of lives forced the British to supply better provisions and medical support, but the cruel punishment continued.

The history and durability of the Success is impressive. Built in Burma, India, in 1840 the 135-foot barkentine sailed as a merchant vessel for eight years in trade between England and the East Indies. From1848 to 1852, she carried settlers on voyages from England to Australia. When the crew left in 1852 to seek riches in the gold fields, the Crown bought her for use as a prison ship. She sailed in this capacity for nine years and was so badly in need of repairs, she became an ammunition storage facility. The ship was finally scuttled in 1885 in the harbor at Sydney where she remained underwater for five years.

Like the legendary Phoenix rising form its ashes, the Success was raised, rehabbed and destined for greatness. She indeed became a “success” as a tourist attraction in Australia, England and Ireland. Spotting a perpetual jackpot of profits, an American bought the ship in 1912 and sailed it from Liverpool to Boston in 96 days.

The next 20 years were heydays for the owner as people flocked to tour the infamous convict ship, handle the torture devices and listen to lurid tales of human suffering. Contests were held to see who could spend the most time in the black hole. There was a waiting list for couples who wanted to be married aboard the ship. Popular everywhere she went, the Success tied up at ports in New England, the Mississippi, the Pacific Northwest and the Great Lakes.

In 1943, a new owner purchased the ship, but three years later while docked near Sandusky, Ohio, vandals set fire to it as a prank on July 4, 1946. Thus the ship’s last hurrah was to provide an Independence Day spectacle for holiday celebrants.

Today, divers can glean a little history of a Great Lakes ship that recorded an amazing 106 years longevity.  One of the oldest ships sunk in the Great Lakes, the Success was grounded and broken up in Lake Erie close to shore off Port Clinton, Ohio. Its spine and ribs rise a few feet off the sand and mud bottom. Some of its teak planking and metal fittings are scattered nearby. Visibility in the 15-foot-deep water is usually poor and boat traffic heavy. But by gosh, I’m going to visit it. It’s on my bucket list. Put it on yours. Cheers!