The Manila Galleons: Treasures For The ”Queen Of The Orient”

Picture if you will, a four-deck, 100-gun, 2,500-ton vessel crossing the Pacific loaded with treasure and not making landfall for six months. Picture it as short and broad—with high fore and stern castles—carrying so much silver and gold, it draws 40 feet of water while skirting coral reefs 30 feet deep. It’s no wonder that close to 100 of them sank from 1570 to 1815, leaving a trail of treasure across the globe, while enhancing the image of adventure on the high seas aboard the MANILA GALLEONS. 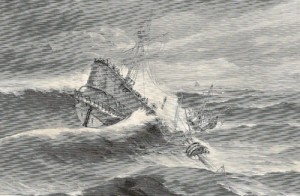 Nowhere in the annals of the Spanish Empire’s colonial history did a treasure fleet attract so much intrigue and notoriety for its precious cargoes bound for the Far East. Maritime historians continue to pay homage to these vessels and their influence on international commerce that lasted for over 200 years. These were the largest ships afloat, plying long and risky routes. Convoys of two to five ships left Acapulco, Mexico, setting sail for the Spanish colony of Manila in the Philippines. On an average, three to five million silver pesos were shipped annually from Mexican mints to Manila, the “Queen of the Orient.” The sliver and gold was waggishly referred to as “silk money.” Silk stockings were prized by the fashionable Spanish gentry in Mexico and Spain. But the silver and gold bought other lavish exports as well. They came from all over the Far East: spices, Ming porcelain, opals, amethysts, pearls and jade. There were art treasures, ebony furniture, carved ivory and other exquisite rarities found only in China, Japan, India, Burma and Siam.

The galleons, after a long and laborious return voyage eastward, often made landfall around Cape Mendocino, California, then sailed on to Acapulco. Once unloaded, the cargoes were transported overland by mule train to Veracruz and then taken by Spanish galleons to Seville, Spain. Five Manila Galleons are known to have sunk off the west coast of the United States. One, the San Agustin, sank in 1595, victim of a gale in Drakes Bay, northwest of San Francisco. 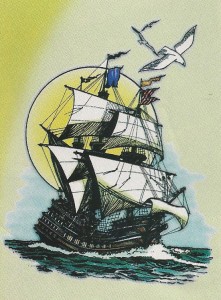 Manifests show that one third of all the silver and gold mined in the Spanish New World made its way to the Far East aboard the lumbering Manila Galleons. Ingots and heavy chests of coins were stored over the keel in the main hold, often the only ballast used for draft and stability. The ships also carried supplies to colonists in the Marianas and Philippines. The Strait of San Bernardino, on the eastern end of Luzon in the Philippine Archipelago, separates the Pacific from the China Sea and remains one of the most treacherous passages ships must ply. Even the most seasoned mariners fear entering and exiting the shallow poorly marked waterway. Of the approximately 130 Manila Galleons lost, close to 100 sank within a 50-mile radius of the entrance to this dangerous strait. Some of the vessels simply ran aground on reefs or shoals, while others were lost in storms or sunk by British and Dutch privateers.

Manila Galleons are out there. Picture them if you will, resting in the Pacific Ocean and China Sea–emblazoned with the regalia of Royal Spain and the Roman Catholic Church–waiting to be discovered by modern-day adventurers. 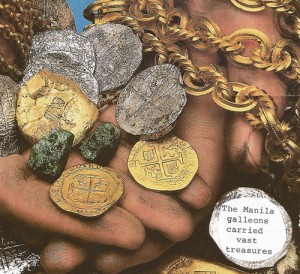