Mutiny on the Bounty Leaves Remains of Perilous Voyage 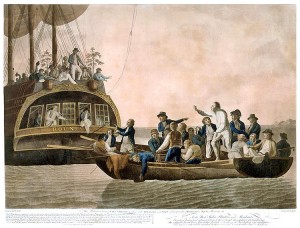 Countless books and films have featured Mutiny on the Bounty, the provocative 18th century saga of a harsh captain and his rebellious crew aboard an English ship. Based on a novel by Charles Nordhoff and James Hall, the story follows the real-life mutiny led by Lt. Fletcher Christian against Capt. William Bligh on the HMS Bounty.

After setting Bligh and some of the men who remained loyal to him adrift in a 23-foot “longboat,” Christian and his followers returned to Tahiti where they had stopped to load breadfruit saplings. Their orders—signed by an admiral of the English Royal Navy—were to deliver the breadfruit to the British colony of Jamaica where it would be grown as a cheap source of food for the slaves.

After sailing for 10 months across 27,000 miles of open sea, Tahiti was indeed a pleasurable paradise. When it was time to shove off, the men reluctantly left their lush environs and free love with the Tahitian women. The Bounty departed Tahiti with a cargo of 1,000 saplings, but three weeks later near the island of Tonga, the mutiny transpired.

Conflict between the men stemmed from class differences between the aristocratic Christian and his ambitious ship’s master. Bligh wanted to impress his naval superiors and gain career advancement, while Christian was concerned about the well-being of the men who were subject to “inhumane treatment.” The crew had never dealt with such an ill-tempered, cynical leader with a cock-of-the-walk demeanor. These were hardy sailors, used to being at sea for months and sometimes a year or more. But the overbearing Bligh, in an effort to reach Tahiti sooner by trying to skirt the islands off Cape Horn, South America, lost time instead. In an effort to make it up, Bligh worked the crew harder and cut their rations.

Led by Christian, the mutiny succeeded with the departure of Bligh and his loyalists. After returning to Tahiti, Christian and eight of his men took some Tahitian women and set sail in search of a hideout from the British Navy. The fugitives scoured the Pacific, sailing through 8,000 miles of perilous seas before settling on Pitcairn Island. They set fire to the ship and sank it close to shore in what is now Bounty Bay.

It’s been more than 10 years since the United Kingdom gave permission for tourism development on Pitcairn Island. This includes arrangements made through local officials to dive the remains of the HMS Bounty. There’s not a lot to see, but divers who have visited the site describe it as “an epic adventure.” There are some coral-encrusted timbers, ballast stones, an anchor and a cannon scattered in shallow water. As one diver put it: “Diving the Bounty is like putting the final piece together in a puzzle that chronicles one of the most exciting seafaring tales of all time.”

Pitcairn Island, located in the South Pacific halfway between New Zealand and Peru, has been called “one of the most isolated places on earth.” It’s 3,000 miles from any continent and too small for an airport. Yachts and cruise ships stop there, but only for a short time due to the lack of a safe anchorage. Ocean Voyages, Inc., Sausalito, California, is one of several travel agencies that arrange charters from French Polynesia to Pitcairn Island.