Would you be interested in joining me on a search for the presidential yacht, Despatch, sunk off Assateague Island, Virginia? I’ve been thinking about this for years. I would need someone with a boat, someone who has side scan sonar or a magnetometer, and someone with marine archaeological experience. Another ship researcher might be good too. I could use some help in tying in some loose ends.  Summertime or early fall would be best for our venture. I would propose five, maybe six of us at most. We would share expenses and hopefully, some good times. I think it would be worth a try. 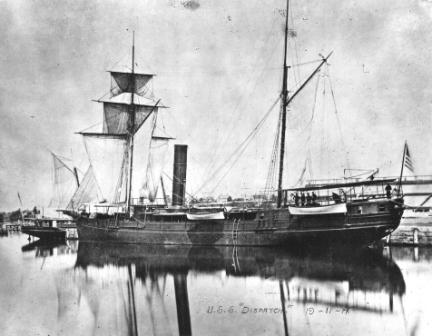 Historical records reveal that the Despatch, one of the largest and handsomest yachts afloat when it was built in 1873, was the pleasure craft for presidents Rutherford B. Hayes, James Garfield, Chester Arthur, Grover Cleveland and Benjamin Harrison. President Harrison and Secretary of the Navy Benjamin Tracy were planning to visit the naval proving grounds on the Potomac River in October, 1891, when the Despatch failed to show up at the dock. Returning from New York with just its officers and crew, the sleek, single-funnel steamer ran into a sudden squall off Virginia. The ship’s lieutenant, mistaking the orange glow from the Assateague lighthouse for the offshore red hue on the Winter Quarter Shoals lightship, steered the yacht off course and on to the shoals. Boxes of cigars, candles and canned hams were gathered by bystanders who watched the ship sink in 20 feet of water. The officers and crew made it safely to shore.

In 1997, Ben Benson, head of Sea Hunt, Inc., a New Hampshire salvage group, made a secondhand discovery while searching for the Spanish galleon, Juno. The Despatch, sunk in the same area as the Juno, was icing on the cake for Benson as he looked for the treasure galleon. He found the presidential yacht, but didn’t have time to survey it. He did a look-see, got a permit, and planned to return at a later date. Meanwhile, he turned his full attention toward his main objective.

Benson eventually found the Juno, sunk in 1802 with a large cache of silver pesos aboard, but ran into a bureaucratic nightmare. Spain promptly claimed the wreck and the U.S. government—egged on by the U.S. Park Service and Justice Department—overruled Benson and the state of Virginia and gave salvage rights to Spain. The Spanish did nothing with the shipwreck.  Benson tried to fight it, but finally packed up and returned to New Hampshire thoroughly disgusted with the legalities and litigation.

I called Tony Watkenson, Chief of the Habitat Division for the Virginia Marine Resources Commission, who outlined all the particulars for our search. The wreck rests in shallow water not far from the beach. If we find it, he’ll issue a salvage permit. Any artifacts retrieved will be donated to the state for display in several of its museums.

So that’s it. Shall we do it? Think about it as you hum a few bars of Hail to the Chief! Like the legendary Phoenix that rose from its ashes, the remains of the Despatch–an historical American treasure, might rise from the sands of Assateague Island.