Cussler is Ghost Buster in Discovery of Mary Celeste

When author/adventurer Clive Cussler found the remains of the Mary Celeste, he closed a chapter in the mystery of a “ghost ship” left floundering aimlessly in the mid-Atlantic more than a century ago. The second chapter, revealing what happened to the captain, his family and crew, has yet to be written. Cussler found the wreckage, but the unsolved mystery of the 282-ton seaworthy brigantine still whets the appetites of maritime sleuths throughout the world.

On December 4, 1872, while en route from New York to Gibraltar, Capt. David Morehouse and his crew of the Canadian brigantine Del Gratia spotted a strange silhouette on the horizon. Closer examination revealed a deserted ship, seven of its sails furled with some rigging hanging over the gunnels. The boarding party discovered a spooky scene. They found three feet of water in the hold, but the pump still worked. They found the binnacle out of place and the compass destroyed. Anchors and chains were in place. Two hatches were open, but the main one was battened down. The sextant, a navigation guide and ship’s papers belonging to Capt. Benjamin Briggs were missing. His belongings and the crew’s clothing, boots and oilskins were left behind. Storage bins held a six months supply of food and water. The ship’s log, lying open in the first mate’s cabin, was up-to-date with a last entry made on November 25.

According to records kept by the Atlantic Mutual Insurance Company, the Mary Celeste left New York on November 7, 1872, bound for Genoa, Italy, with 1,700 barrels of alcohol in the hold. When discovered, the vessel had passed the last of the Azore Islands with about 600 miles remaining on its 3,000 mile voyage.

Theories about the mystery floated around for years (pun intended). They ranged from mutiny and murder to the sudden appearance of a phantom island rising from the depths, luring all aboard ship to their death. A more plausible account blamed a climatic change and leaking cargo as the culprits. The vessel, having sailed away from the cold New York temps, entered the toasty domain of the Azores where atmospheric changes affected the cargo. Upon opening the hatches to the unventilated hold, uprising fumes from the barrels of alcohol—some of which may have leaked—alarmed the crew. Captain Briggs, fearing for the safety of his two-year-old daughter, wife and crew, may have ordered the long boat to be lowered and joined to the brig by a tow rope. The plan was to return to the ship when the fumes subsided. But heavy seas could have parted the tow line, separating the long boat from the mother vessel in visibility which was rapidly deteriorating. Meteorological reports for the afternoon on that date showed gale force winds prevailing over this part of the Azores.

Upon debating the risks of sailing Brigg’s ship to port with a skeleton crew, Capt. Morehouse made his decision. He would spare three of his best men to pump the hold, straighten the sails and urge them to stay close to the Del Gratia. The patched up ship was slightly smaller than her escort and Morehouse felt good about the experienced seamen he had chosen to sail her. Except for some heavy seas and rain off the coast of Africa, both vessels sailed without incident and arrived safely in Gibraltar having covered 600 miles in 10 days. Hearings were conducted by Gibraltar’s Vice Admiralty Court to verify the chain of events and determine the amount of the salvage award. The final decree of $8,300 was a great disappointment. The salvors were expecting more than double the amount. Morehouse sailed on to Genoa, while the Mary Celeste remained in port until the owners found a new captain and crew. On March 10, 1873, the legendary ghost ship left port under a new master, Capt. George Blachford of Wrentham, Massachusetts. The brig sailed for 12 more years under several other captains and owners until January 3, 1885, when it sank after striking Rochelais Reef off the northern coast of Haiti near Gonave Island. All hands made it to shore safely and the ship foundered on the reef long enough for examiners to discover a scam. It didn’t have the $25,000 worth of cargo it was insured for and the captain died before he was tried. As the years passed, wind, waves and tropical storms dashed the hulk to pieces.

Clive Cussler and his National Underwater and Marine Agency (NUMA) have discovered 75 shipwrecks, many of which appeared in his novels. With help from the late Bob Fleming, a renowned researcher, Cussler obtained the coordinates of the wreck site. Accompanied by John Davis and three of his photographers from Eco Productions, Nova Scotia, Canada, the intrepid author boarded the 54-foot steel hull research vessel Ella Warley II owned and operated by Alan Gardner of Highland Beach, Florida. The team picked him up at Labadee Beach on the north shore and headed straight for Rochelais Reef. 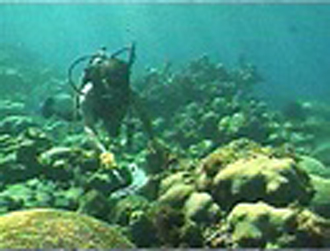 Using Fleming’s coordinates and a cesium marine magnetometer, it wasn’t difficult to locate the wreck. Master Diver Mike Fletcher led the team through the barely recognizable fragments of what was once a stout brigantine. Except for a small portion of the lower hull, most of the remains were encased in coral and sand. The divers salvaged various samples of wood, copper sheathing and ballast stones which maritime specialists later matched to the shipbuilding records of the Mary Celeste. After its extensive search, the NUMA team was confident it found the grave of the ghost ship. An extended hunt verified that no other wrecks were in the vicinity of Rochelais Reef.

Although there was final closure in determining the fate of the ship, the question of what actually happened aboard the Mary Celeste still remains a mystery. As Cussler so aptly put it, “She’s enshrined as the most famous ghost ship in the history of the sea.”