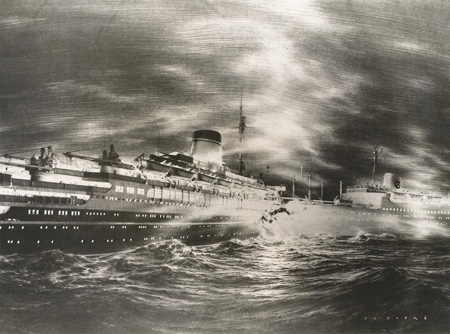 Ship historian and author John Maxtone-Graham wrote in his book, The Only Way to Cross: “Disaster at sea is never predictable and seldom consistent.” Such was the case in the demise of the Italia Line’s SS Andrea Doria when it was struck by the Swedish-American Line’s MS Stockholm, July 25, 1956. Radar was in vogue and used successfully for years. Both captains were experienced mariners with excellent records and past voyages of both ships were accident free. So what went wrong?

The navigators of both vessels watched one another on radar, but in following international rules: “Each vessel will alter its course to starboard so that each will pass on the port side of the other,” both made unnecessary turns. Had they stayed their course, starboard to starboard, the ships would have safely passed in the night. The third mate aboard the Stockholm—en route from New York to Gothenburg, Sweden—was blamed for making the wrong turn. But the Andrea Doria, cruising in miserable conditions at close to full speed, 21.8 knots, shared the blame. With many watertight compartments, similar to the Titanic, it too was declared “unsinkable.” Nearing the end of its regular Genoa, Italy, to New York run, the luxurious Italian liner took a devastating hit on its starboard side and sank within eleven hours. 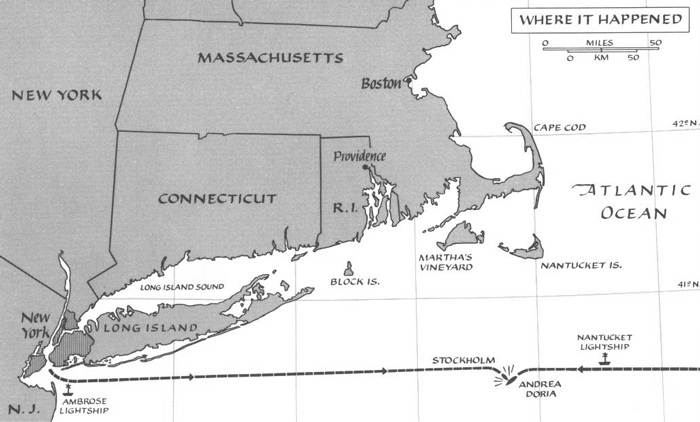 Fifty-one of the 1,650 passengers and crew died on the Andrea Doria, while five perished aboard the Stockholm. Several vessels, including a U.S. Coast Guard cutter and a French ocean liner, Ile de France, aided in the rescue. With its bow smashed in like a car from a demolition derby, the Stockholm remained afloat and returned some of the survivors to New York. The three-year-old 697-foot stalwart liner—nicknamed Grand Dame of the Sea—settled on the bottom of the Atlantic Ocean, 250-feet below, 50 miles south of Nantucket, Massachusetts.

Peter Gimbel, an investment banker and heir to the Gimbel department store chain, was the first to dive the wreck 28 hours after it sank. He returned four times over the next 25 years to film and write about his fascination for one of the queens of Atlantic transportation. In 1981, he retrieved the purser’s safe, an anti-climatic endeavor that revealed some water logged bank notes and soggy Italian lire. Although disappointing, it dispelled rumors of wealthy passengers’ jewels and other treasures being stored in the safe.

East coast diver Mike de Camp renewed interest in the wreck in 1966 when he arranged charter fishing boat trips to the site for experienced divers. By the early 1980s, Captains Bill Nagle of the Seeker, Steve Bielenda of the Wahoo and Sal Arena of the Sea Hunter, offered overnight excursions, usually from mid-June through August when the weather window was best. Charters still leave from docks in New York and New Jersey. The 110 mile trip from Montauk, New York, takes 10 to 11 hours. At first, divers just wanted a glimpse of the giant silhouette resting in the sand on its starboard side, but soon they succumbed to souvenir hunting. A porthole, a china plate with “Italia” engraved on it or a light fixture retrieved from a stairwell elicited delightful conversations around coffee tables and dive club meetings. Unfortunately, in some instances, the salvage risk becomes fatal. At the time of this writing, 18 divers have lost their lives on the Andrea Doria, dubbed the “Mt Everest of Diving” for its challenges and dangers. Some of those lost were veteran divers, while others who were not as experienced pushed the envelope and became disorientated inside the wreck. There’s no defense for the dangers involved. First, divers must endure cold, dark waters accompanied by swift currents and tidal changes. Then they must avoid fishermen’s nets snagged on the wreckage and an occasional shark cruising by. Large commercial vessels also cruise by in this part of the Atlantic, a major shipping lane for years. Rough seas, fog and squalls are commonplace here. By the 1990s, most divers had replaced compressed air with trimix, a combo of helium, oxygen and nitrogen with a decompression hang-time averaging 20 minutes for a dive to 200 feet. Rebreathers are in vogue now. 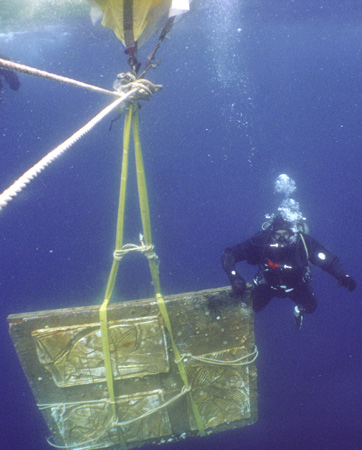 Life Magazine published photos and articles after the disaster with a banner line calling the ship a “Floating Art Gallery.” It was indeed that, plush with paintings, sculptures, bronze statues, painted vases and other objects d’art. In 1993, John Moyer, a Vineland, New Jersey, adventurer plunged 190 feet, entering a dark, silty passageway to recover two 1,000-lb panels with ceramic sculptures on them created by renowned Italian artist Guido Gambone. Moyer organized a 20-member dive team which included buddies Gene Petersen, Gary Gentile and the crew aboard Capt. Bielenda’s Wahoo. It took three dives over two days to remove the art works from the first class Wintergarden Lounge in the forward section of the ship.

Moyer was successful, daring and smart. Before mounting his expedition, he petitioned the Federal District Court in Camden, New Jersey, for an Admiralty Arrest which gave him rights to search and salvage a specific section of the bow. After the recoveries, he returned to court and was granted clear title and ownership under Admiralty Law which governs abandoned shipwrecks in international waters. Moyer’s research had paid off revealing that although the ship was insured, no claim had ever been made. Thus the daring diver from Vineland became custodian of the lost flagship of the Italia Line. In one of the cleverest moves ever recorded in recreational diving, he had succeeded in protecting his little domain and welcomed all divers to visit other parts of his ship.
(Continued next month: What Next Grand Dame?)