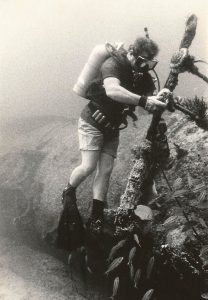 The demise of the German submarine U-352 on May 9, 1942, played out like a scene from Hollywood’s hilarious Keystone Kops with Kapitanleutnant Helmut Rathke playing the leading role. Thinking he had spotted a helpless enemy merchant vessel off the shores of North Carolina, the eager commander fired two torpedoes that missed their mark. His surprise attack was totally exposed when both of them exploded on the ocean floor. Thinking he had hit a merchant ship—one of many being sunk in “torpedo alley” at the time—Rathke was quite surprised when at periscope depth he spotted an armed U.S. Coast Guard cutter.

The German’s major faux pas was all that Lt. Maurice Jester, commander of the cutter Icarus, needed in order to thwart a second attempt. As the smaller vessel unfurled a medley of depth charges in a spread pattern, the commander of the sub tried to hide his vessel in the mud stirred up by the ill-spent torpedoes. He faced his second miscue when the depth charges shattered the gauges in the control room, knocked two electric motors off their mounts and ruptured one of the buoyancy tanks. There was no doubt…the sub had to surface. 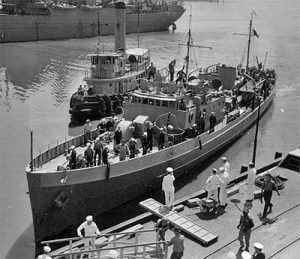 When Rathke threw open the hatch, he faced a mass of twisted steel that was once the sturdy coning tower bridge. Without hesitating, he tossed his secret code book into the sea and gave orders to abandon ship. As the crew scrambled out of the hatch, Coast Guard gunnery sharpshooters, fearful the Germans would get to their deck gun, fired away. In the action-packed melee, they didn’t realize the gun had been blown away by the impact of one of the depth charges. Rathke and his men were bobbing in the water as they watched their boat sink behind them. Coast Guard gunners were still targeting the survivors until Jester ordered a cease fire. The encounter was unprecedented. It was early in the war and there were no guidelines for rescuing enemy survivors from a sinking vessel. Jester, unsure of what to do as his ship floated away from the Germans, radioed three different bases. After much confusion, he was ordered to: “Pick up the survivors and bring them to Charleston.” Doubling back, the Icarus rescued 33 of the original 46 men aboard, all of whom became prisoners of war until hostilities ended in 1945. Rathke was the last one of the survivors pulled out of the water.

The battle was a new, exciting David versus Goliath victory for the Allies and enhanced the reputation of the Coast Guard. Our naval power had been compromised in early 1942 by a lack of convoys for merchant vessels. U-boats sank over 600 “sitting duck” ships from January through August of that year. Four hundred of them went down off the Outer Banks of North Carolina, christening it: “The Graveyard of the Atlantic.”

The Icarus sailors treated their captives kindly, providing sandwiches, cigarettes and medical attention. The Americans found their German prisoners to be fellow sailors who were not much different from them. They wished the Germans well when the cutter delivered them to guards waiting at the dock in Charleston Harbor. 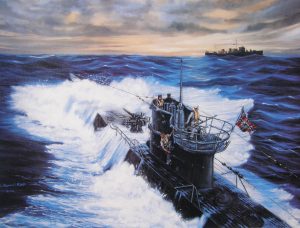 Depth charged and damaged by the U.S.C.G. Cutter Icarus, the VII-C class German submarine U-352 rockets to the surface. The crew begins to abandon their soon to founder U-Boat. 27 miles off Morehead City, North Carolina. May 9, 1942. By by Dianna Garrison

Thousands of POWs were held in North Carolina camps until the war’s end. Other than guards who ran the camps and foremen of civilian work programs, few people knew about the captives being held there. All of them were treated fairly and provided with adequate food, clothing and shelter guaranteed under the rules of the Geneva Convention. Many came to the state as prisoners of war, but left as friends of Americans and each other.

When Capt. George Purifoy, founder of the Olympus Dive Center, Moorehead City, North Carolina, discovered the U-352 in 1974, divers came from all over the country to visit it. They still come, but not without controversy. Not long after the discovery, sport divers created a stir by removing artifacts, including human bones, from the 218-foot-long vessel. The bones were returned to the West German government which declared the site a war memorial cradling live torpedoes and wanted it destroyed. That’s when the U.S. Navy stepped in and played a significant role in the dispute. In the summer of 1980, naval ordnance disposal teams made more than 100 descents to disarm five torpedoes and other munitions that posed a hazard to divers. They found no human remains and with the elimination of the hazardous possibilities, the controversy ended.

Located 26 miles southeast of Beaufort Inlet in 115-feet of water, the sub is visited by dive charters from Moorehead City, Swansboro, Jacksonville and Beaufort. Listing 45-degrees to the starboard with most of her outer shell worn away, the wreck’s forward and stern torpedo tubes, deteriorating conning tower, rudder and diving planes are still intact. The hatch has been removed, but penetration is prohibited on this war grave and National Marine Sanctuary.

Bright colored coral, algae and anemones cover the hull as amberjack, spadefish and sand-tiger sharks cruise around it. Not to be confused with tiger sharks, these curious creatures are non-threatening. Photographers enjoy a field day snapping away at them in the clear waters on the edge of the Gulf Stream.

History books have recorded the U-352 as the first enemy submarine sunk by a U.S. Coast Guard cutter in WWII. This added an exciting account of “Victory at Sea” to the memorable sagas of the war and one that divers can ponder as they explore the venerable remains.