Fallen ‘Star’ Had Galaxy of Troubles 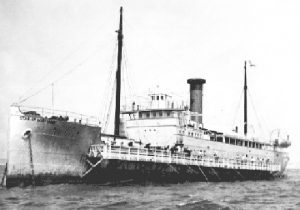 The “Star” fell in Santa Monica Bay on January 23, 1942. Actually, she didn’t really fall…she sank, a victim of wear and tear on the high seas. Unfortunately, a seaman died when the 262-foot-long vessel rolled over in stormy waters that swept through the bay. The Star of Scotland was gone, but by no means forgotten.

How could anyone forget a ship that housed a gambling casino, promoted prostitution and was the scene of a notorious murder? Yet, these devious deeds were somewhat overshadowed by heroism in WWI when she sank a German submarine shortly after being commissioned into the British Royal Navy as the HMS Mistletoe. She was at that time one of a unique fleet of warships built in 1918 to counter-attack the onslaught of German U-boats. Known as Q-ships, which were secretly built in Queenstown, Ireland, the 1,250-ton innovations were warships converted and disguised as merchantmen. Guns, depth charges and other weapons were hidden behind fake bulwarks, deck houses and cargo containers. Skilled navy gun crews were disguised as grizzly seamen conducting ordinary merchant duties until it was time to jump into action. Like something out of a Clive and Dirk Cussler novel, a fighting Q-ship could quickly change its entire appearance with the aid of canvas, wood, paint and funnels, all set up under cover of darkness.

In 1921, the Mistletoe–destined to sail under nine other names during her 25-year career—was sold to a Mexican shipping company. Now the Chiapas, she regained her original role as a merchantman transporting cargo between Panama and San Francisco. Sold within a few years and renamed La Playa de Ensenada, her specialty was fruit shipped from Mexico to major cities on the west coast of the U.S. The fruit was lucrative, but soon replaced by booze when the depression came along in 1929. That’s when a sleazy new owner cut the name back to La Playa and made it a floating speakeasy and gambling casino. 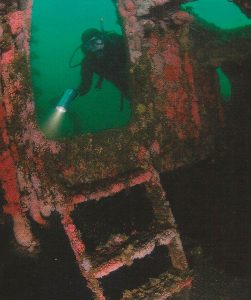 Three years later, a murder took place aboard what was now the City of Panama, an aging but manageable hulk anchored in Santa Monica Bay. When a 24-year-old male passenger was beaten to death—possibly over a gambling debt—all of the vices ceased. Two of the ship’s officers were tried and acquitted and the shady ship, which advertised “cruises to nowhere,” was shut down. Justice was served and vice squads were lauded, but the bust didn’t last long. After a brief hiatus, the ship appeared again off Santa Monica, this time as the Star of Hollywood. Her slogan, “dolls, drinks and dice,” spawned a repeat performance. Local churches and businesses pressured the vice squad into action and they arrested the usual suspects. The vagabond vessel was towed to San Pedro Harbor until new owners from the Lone Star State bought it, named it the Texas and returned it to its old stomping grounds. Gambling money poured in, but the run was short-lived. In 1939, the California State Attorney General’s Office declared all gambling ships illegal and put an end to a decade of debauchery. A year later, Capt. Charles Arnold leased the ship, turned it into a fishing barge and anchored it two miles off the Santa Monica pier. Now the Star of Scotland, it also provided dinner and dancing, but not the shenanigans of the past. Two years later, while leaking badly during the storm, the Star sank creating one of the best wreck diving sites in the Golden State.

Dr. Sam Miller and Pat Smith, two founding members of the California Wreck Divers Club, call the Star “the most prolific dive site in Santa Monica Bay.” Logging in hundreds of dives on it throughout the years, they’ve retrieved their share of fish, lobsters and artifacts from the original Q-ship that rests in 70 feet of water. It attracts sea bass in gaping holes throughout the remains that rise 15 to 20 feet from the bottom. Both Miller and Smith forewarn divers not to penetrate any openings. The decks collapsed when the hull plates separated and created fragile honeycombed chambers. Mackerel, bonito, halibut and lingcod are just a few of many species that frequent the wreck. Rock scallops, flanked by bright colored anemones, cling to twisted steel beams and catwalks. Visibility averages 10 feet, but increases considerably when the offshore winds of winter sweep across the bay. The Star remains, once subjugated by greed and salacious behavior, now recognized eminently as a wartime heroine and divers’ paradise.
Note: Shipwrecks of Southern California by Pat Smith and Bonnie Cardone (Menasha Ridge Press, Birmingham, Alabama, 1989) features a chapter on the Star of Scotland in addition to 50 other popular wreck sites.