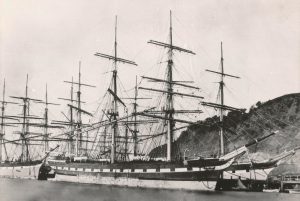 The Windjammer Mairi Bhan at Dockside

I don’t know who named the Mairi Bhan a “ghost ship.” Perhaps it was the local fishermen, but the moniker has stuck throughout the years. Divers refer to the 239-foot- square-rigged bark as the “Windjammer.” A deep encounter for experienced divers, the three-masted merchant vessel, victim of a storm in 1912, rests on her starboard side close to shore off the port city of Kralendijk, Bonaire, in the Lesser Antilles. A boat or shore dive, the wreck lies in 140 to 180 feet of water directly in front of the Bonaire Petroleum Corporation (BOPEK) fuel oil storage and transportation terminal. 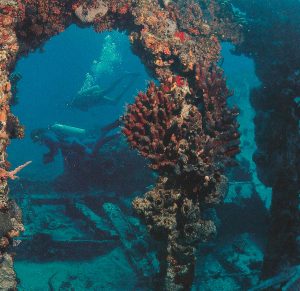 Divers lose some of the bright light in the crystal clear waters as they drop to within 100 feet of the remains. That’s when a large, dark silhouette appears suddenly, its size enhanced by the white, sandy bottom. The vessel looked like a Hollywood movie set to me when I visited it a few years ago. The iron hull was still well preserved with its railings intact. Divers may remain near the railings at 140 feet or descend another 40 feet and peer into the dark, hollow innards of the hull. Teredo worms ate the wooden decks away and the remaining metal fittings were salvaged. There were no engines…it was the age of sail. Two of the masts, one with a crow’s nest attached, rest on the bottom slanting down and away in deeper water. Bright colored hard and soft corals, flanked by crinoids and nudibranchs, cling to the hull. Margates and groupers dart around the coral formations, then slip into the shelter of the shadows. Fragments of asphalt litter the bottom, part of the cargo that spilled out when the ship keeled over.

The Mairi Bhan (Gaelic for Bonny Mary) is listed in Lloyd’s Wreck Returns for the year 1912, “sunk off the coast of Bonaire while transporting a load of asphalt from Trinidad to Marseille, France.” Built in 1874 at Glasgow, Scotland, the 1,315-ton vessel was built to ship hand-crafted goods from New Delhi, India to London, England, for a thriving import business. Contemporary accounts called her “one of the handsomest ships sailing the Pacific.” Her maiden run from Glasgow to Port Chalmers, New Zealand, was completed in 75 days, very fast back then. She was sold at the turn of the century to an Italian firm, Denegri and Mortola, based in Genoa. 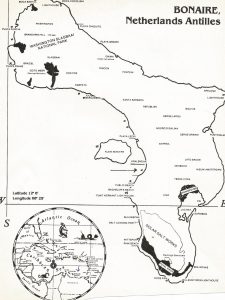 The Italians turned her into a tramp sailer that went wherever the business was good. In 1912, she carried leather goods, fabrics, olive oil and marble from Italy to Trinidad where she traded for a load of asphalt and headed for Marseille. While riding the trade winds off Venezuela, she made a northeast turn to cross the Caribbean when a sudden storm roared out of the mountains. Capt. Luigi Razeto, ship’s master for five years, decided to head for the protection of Bonaire, but got blown past the island in a northward surge. As he doubled back along the coast, his vessel grounded on the reef and began to list. Barrels of asphalt shifted and broke open in the holds releasing fumes which were ignited by a kerosene lamp. During the ensuing explosion and raging fires, four crewmen were swept away and perished, while 28 others made it safely to shore. With her bow facing the shore, the windjammer heeled to starboard, slid down the reef and ended up at the bottom of the drop-off. The molten asphalt spilled out of the holds like lava and hardened on the bottom to form a flat black plain as the ship settled in unseen by anyone until more than half a century later.

When Spanish explorer Amerigo Vespucci landed in Bonaire in 1499, he found a tribe of Arawak Indians chewing divi-divi leaves for moisture while awaiting the rainy season. Fascinated by their culture and the 24 by 7 mile island with its many goats and iguanas, he vowed to return. Today, divers who visit the island take the same vow, only in this instance Bonaire returns on its own. Shaped like a boomerang, it keeps coming back in dreams of white sand beaches, friendly people and a fascinating ghost ship sunk in crystal clear seas.