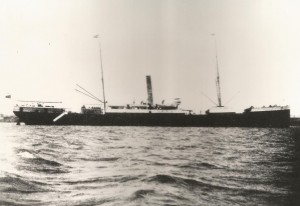 The Benwood, anchored off Rosario, Argentina in 1924

Most of the dive operators in the Upper Florida Keys might agree that the MV Benwood—a 360-foot freighter sunk during WWII—has attracted thousands of divers throughout the years. Where else can you find a colorful, coral encrusted wreck overrun with marine life in clear, shallow water?

The site is frequently used for checkout dives, while experienced divers keep returning to the popular Norwegian cargo ship site listed on NOAA Nautical Survey Charts. But years ago, the charts weren’t always accurate. They listed the wreck as the MV Brentwood thus leading researchers, including yours truly, down a dead-end. It wasn’t until I consulted the late Jean Haviland (See Numa.net, “The Wreck Lady: She Will Have Shipwrecks Wherever She Goes,” May 31, 2013) that I unearthed the mystery of what some divers call the “Ghost Ship.”

While other vessels were being torpedoed by German U-boats, a collision decimated the 3,391 cargo carrier bound from Tampa, Florida, to Norfolk, Virginia, transporting a load of phosphate. In a clash of tanker versus cargo ship, the latter lost and sank in shallow water on Molasses Reef, near Key Largo, Florida. 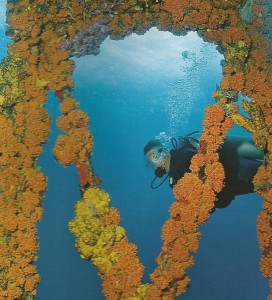 At midnight, April 9, 1942, the Benwood was sailing smoothly on course until Molasses Reef was abeam—about two and a half miles away. She was cruising in a pitch black night, no moon nor stars and running without lights as all ships did at the time. Only two weeks before, a merchant vessel in the same shipping lane had been crippled and nearly sunk by a marauding German sub.

At about 1:30 a.m., the watch spotted a large vessel about one mile away, two to three points to the Benwood’s starboard bow. It was later identified as an American ship, the Robert C. Tuttle, running without lights at 13 knots. Both ships spotted each other at about the same time. As the tanker swung to her starboard, her port side moved directly into the path of the freighter. When the Benwood’s bow struck the Tuttle’s port side, the tanker hardly felt it, but the freighter’s bow was crushed. As water poured in, Capt. Torbjorn Skjelbred wasted little time ordering his 38-man crew to abandon ship. Fourteen of them drifted in a lifeboat until they were picked up by the Tuttle’ s crew at 4:30 a.m.

Two other lifeboats—with the captain and remaining crew aboard—raised sails and landed at Doc Knowlson’s Gulf Stream Lodge at North Key Largo. The Tuttle meanwhile made it safely to Key West, while the Benwood’s captain and remaining crew met with Navy personnel at the lodge. The freighter was abandoned and left to the mercy of the sea and later dynamited to prevent it from becoming a navigational hazard. 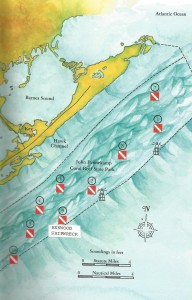 Years ago, I discovered the fun of snorkeling the vast perimeter of the wreckage and then donning a tank for close scrutiny of the eerie remains. The ship’s bow was crushed back past the windlass, resting in the sand only 45 feet deep. Amidships rested on a somewhat shallower ledge. The vessel, broken in two suffering holes in her side, indicates telltale evidence of time and tides. Twisted and torn, this sector once the proud asset of Capt. Skjlbreds, looks as if it has been to hell and back.

I could barely discern one of the disfigured masts resting across the deck. Parts of railings are scattered near it festooned with colorful coral clusters. Fat blue parrotfish nibble at the coral while tiny, brightly-hued royal grammas dart in and out of delicate sea anemones clinging to the wreckage. Queen angelfish circle clumps of fire coral and a green moray eels pokes its nose out of a dark hole in a rusty boiler. Barracuda often hang motionless over the wreck and a nurse shark occasionally makes an appearance. Both the bow and stern are smashed almost beyond recognition, while the pilot house is obliterated. There are gaping holes in what remains of the deck where bent iron girders are strewn below like leftover parts in a child’s play set.

One of 10 shipwrecks on the Florida Keys National Marine Sanctuary Trail, the Benwood remains an outstanding site to explore and protect.