Shipwreck Has Tie-in With the “Real Rhett Butler” 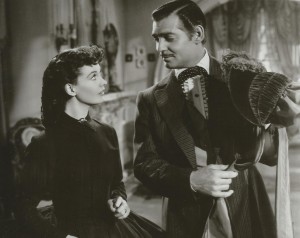 When biographer Darden Asbury Pyron wrote the life story about the renowned author of Gone With the Wind (Southern Daughter: The Life of Margaret Mitchell) he discovered close ties between real people and the characters in her 1936 epic. It’s believed that Mitchell’s characters were based on members and friends of her extended family and incidents in their lives, although she never admitted it for fear of being sued. One of her major characters—Capt. Rhett Butler—could have been George Alfred Trenholm, a handsome, rugged Charleston entrepreneur and backer of blockade runners.

Trenholm’s life is chronicled in Ethel Nepveux’s book, George Alfred Trenholm and the Company That Went to War, 1861-1865. Mrs. Nepveux, a Charleston historian and Trenholm’s great granddaughter says, “There were numerous resemblances between my great grandfather and Rhett Butler. I read and reread Gone With the Wind and Butler’s comments about blockade runners were exactly like those of George Alfred Trenholm. Mitchell must have researched my great grandfather’s career and used his background and personality to help shape Butler’s character.” 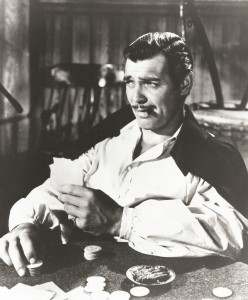 Clark Gable as Rhett Butler in Gone With The Wind

Nepveux believes the ties between Trenholm and Butler were too bona fide to be coincidental. Trenholm was a southern patriot whose money and knowledge of overseas trade enabled the Confederacy to jump-start the war effort by importing munitions, medicines and other vital necessities in exchange for millions of dollars worth of cotton. In a scene from the film, Scarlett infers that Rhett must have stolen large sums of money in his possession, but he explains that it came from sales of cotton and was earmarked for overseas bank accounts that funded the war effort. That was exactly how Trenholm operated.

Similarities between Butler and Trenholm appeared again in 1967 when divers salvaged cargo from the blockage runner, Georgiana, that further linked fiction to reality. The 14-gun emplacement vessel, running from Nassau, Bahamas, to Charleston, was the stoutest Confederate cruiser ever built. The powerful 407-ton, 200-foot-long steamer had a crew of 140 men, a clipper bow and a 150 HP engine. The 14 guns were scheduled to be mounted once the ship reached Charleston where it would become a fighting privateer.

On March 19, 1863, the Union yacht America spotted the Confederate cruiser outside Charleston Harbor and alerted the gunboat Wissahickson, whose captain maneuvered his vessel directly in the path of the blockade runner. Realizing he was trapped, the southern captain ordered full speed ahead toward the beach. When the vessel ran aground, three-fourths of a mile from shore, the skipper and his crew scuttled it and slipped away in longboats. The Wissahickson’s crew found the ship submerged in 14 feet of water. Fearing a return of rebel salvors, they set it afire and later learned of the valuable cargo left behind. Over the years, the blockade runner and its remaining cargo settled beneath tons of shifting sand and silk. 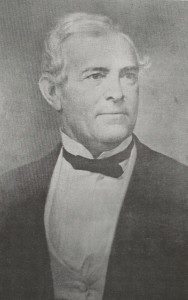 In 1967, divers working jointly with the Dept. of Archaeology, University of South Carolina, found the remains of the Georgiana. Although much of it was buried, the ship’s boiler, starboard side and iron deck supports protruded from the bottom. Working in almost zero visibility, the divers dug their way to the forward cargo hatch and discovered some small intact cargo crates. Among the discoveries were medicines, munitions, buttons, pencils, plates and straight pins. Over one million of the latter, all brass, were part of the cargo sorely missed by southerners who were waiting eagerly for them.

The pins, a seemingly insignificant item, were scarce and in demand. Scarlet O’Hara—in a dramatic scene from GWTW–begs Capt. Butler to get them past the blockade for her. Ironically, Trenholm owned a blockade runner, the Georgia, whose manifest included millions of pins.

Although it may never be proven, the ties branding George Alfred Trenholm and Capt. Rhett Butler as one and the same are there for GWTW fanciers to peruse. As for those who “frankly don’t give a damn,” well “fiddle-dee dee,” time marches on and “tomorrow’s another day.”