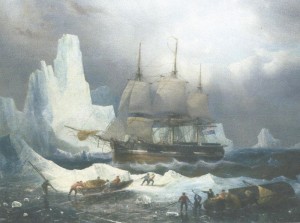 What would the odds be on a ship that bombarded Fort McHenry in 1814 being discovered during the September, 2014 Star-Spangled Spectacular anniversary of our national anthem? A million to one you say? Probably so, considering Canadian Park Service officials had almost given up the search after many years of frustrating attempts.

But during Baltimore, Maryland’s grand bicentennial celebration of our national anthem and the battle waged against the British at the fort during the War of 1812, something else spectacular occurred. Canadian Prime Minister Stephen Harper announced the discovery of the HMS Terror in the Arctic Ocean off Nunavut, 1,800 miles north of Toronto. The Terror and its sister ship, HSM Erebus, launched mortar shells against the fort in the Battle of Baltimore, September 13-14, 1814. Both vessels were lost in 1846 during Sir John Franklin’s expedition to map a northwest passage to Asia. 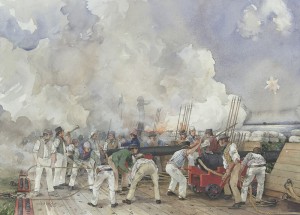 According to a message found in a cairn on King William Island in 1859, the ships became trapped in the ice and remained steadfast for nearly two years. The message revealed that Franklin and 23 of his crew died in 1847. In April, 1848, the 105 remaining hands deserted their ships and were presumed dead after both vessels vanished.

John Geiger, CEO of the Royal Canadian Geographical Society—which participated in the search—reported that a remotely operated vehicle (ROV) used side scan to pinpoint the wreck in 35 feet of water. Parks Canada, a federal agency, had led six searches since 2008. The prime minister called it “a resolution of one of Canada’s greatest mysteries.” At a press conference Geiger added, “This is a very significant discovery. It’s a wonderful and exciting find that promises to shed more light on the ill-fated expedition’s final months, weeks and days.”

Early glimpses of the wreckage suggest it is well preserved. Scientist Ryan Harris, who led the search, displayed a sonar image at a press conference that revealed both the deck structures and the mainmast, which was sheared off by the ice when the ship sank. Harris said, “The melting of Arctic ice sheets is opening up the possibility that ships traveling between the Pacific and the Atlantic could use this northwest passage as a shortcut. The melting will also help us to further investigate the remains of the ship.” 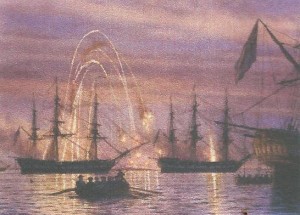 Meanwhile, organizers of the successful bicentennial gala were ecstatic over the dual occurrences: a Royal Navy ship, whose “bombs bursting in air” inspired Francis Scott Key to write the Star Spangled Banner, was discovered at the same time that his legacy and the fort’s triumph were being hailed.

Bill Pencek, executive director of the Maryland War of 1812 Bicentennial Commission, summed it up best when he said: “There’s no place except Ontario and the nations of Canada as a whole that matches the enthusiasm for the War of 1812 as we do here in Maryland.”