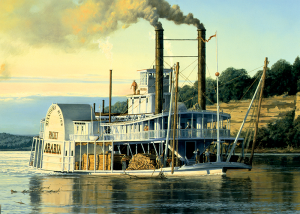 Strange shipwreck discoveries are not unusual, but few rival the puzzling paddlewheel steamboat that Bob Hawley uncovered in 1988. It’s commonplace for the remains of sunken paddle wheelers to be found along the banks of the Missouri River, victims of storms, fires and founderings during the 19th century’s western frontier movement. But this one was rare.

“Westward Ho!” cried the 130 passengers aboard the steamboat Arabia as it cast off from Kansas City, Missouri, in 1856 bound for Omaha, Nebraska. Not long after its departure, the 171-foot vessel, her twin stacks belching smoke and ash, struck a submerged log and sank within 10 minutes. The passengers and crew survived, but their belongings and the cargo went down with the boat.

Enter Bob Hawley, a refrigeration company owner from Independence, Missouri, whose penchant for adventure was vacationing in Colorado and digging for gold in a hard rock mine. But with little luck or return, his craving for treasure led him to the riverboats that often carried consignments of gold and military payrolls.

Accompanied by his two sons, David and Bob, Jr., and friend Jerry Mackey, Hawley set his sights on the Arabia, a steamboat that had ferried soldiers to the Dakotas to settle an Indian dispute; transported Mormons on their journey toward the promised land of Utah and delivered weapons to abolitionists who were fighting to make Kansas a free state.

The Hawleys got a rough idea of the of the boat’s location by researching records of two failed searches. Although the Arabia had sunk off Parkville, Missouri, changes in the topography had shifted the channels and river routes to the northeast. This put the boat beneath a farm nine miles north of Kansas City and about a half-mile from the riverbank.

With permission from the landowner, the search team used metal detectors to gather many hits. This was the easy part. The rest was labor intensive with a dash of salvage ingenuity. As fast as the bulldozer and crane dug a hole, heavy groundwater filled it back in. But hundreds of feet of pipe and a creative system of submersible pumps solved the problem. The team reached the top of the vessel’s port paddlewheel after 17 days of hard work. 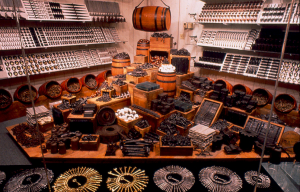 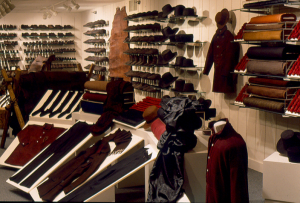 A well preserved Wedgewood bowl adorned with a hand-painted Oriental landscape was the first find. Several days later, two hundred more bowls, platters and pitchers were discovered in the muck.

“From then on,” Bob Hawley says, “everyday seemed like Christmas. We found boots, shoes, hats, barrels of nails and other materials intended for construction of frontier homes.”

The team was amazed when it found coffee beans from South America, guns from Belgium and trade beads from Czechoslovakia. Boxes of patent medicines and pungent liniments were uncovered along with clothing, shoes, hand creams, hairpins and brass-tipped pens. When opened, bottles of French perfume were as aromatic as the day they were produced in Paris.

There was no gold or military payroll, but the Hawleys didn’t mind. They had discovered “America on the go,” rare finds they were determined to preserve.