Treasure Ships of the Great Lakes 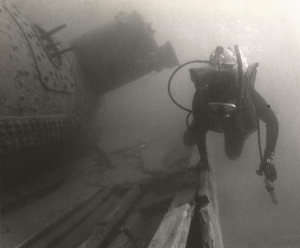 Jim Barrett of St. Paul, Minnesota, writes: “After researching the CITY OF BANGOR, sunk in Lake Superior in 1926—and how its cargo of new automobiles was salvaged—I’m wondering what other treasures have been recovered from the Great Lakes?” Although parts of Lakes Ontario, Huron and Superior are so deep that salvage has seldom been an option, Lakes Michigan and Erie have relinquished some valuable cargoes from their shallow depths.

While vessels laden with barley, wheat, rye and corn were unlikely candidates for salvage, iron ore, coal and whiskey were more desirable. Coal, usually shipped from Pennsylvania, Ohio, Illinois, Kentucky and West Virginia, was burned in the furnaces and smelters in the Lake Superior regions of Michigan, Wisconsin and Minnesota. It was also the primary fuel used to heat most homes. Iron ore had less value, but its counterpart, pig iron, was a Great Lakes treasure. 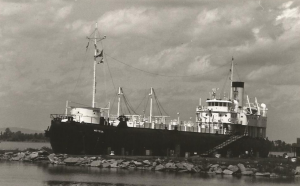 Whaleback steamer SS METEOR, typical of the ships that carried coal on the Great Lakes. Photo Credit: Head of the Lakes Maritime Society.

Illegal cargoes were treasures too, such as the 1,000 cases of whiskey smuggled by the CITY OF DRESDEN during the days of Prohibition. In 1922, when the ship ran aground in Lake Erie during a November gale, salvors recovered what they could before law enforcement officers arrived.

When the steamer, LINDEN, went down in the St. Clair River in 1905, the Port Huron Wrecking Company used pontoons and cofferdams to salvage 1,000 tons of coal, and eventually raised the vessel.

In 1913, the HOWARD M. HANNA, JR. was transporting 9,000 tons of coal when it foundered on the rocks of Lake Huron. By the time the insurance company settled the lost cargo claim and hired a salvor, local residents had off-loaded most of the coal. It was reported that locals from Port Austin, Michigan, were still burning some of it 10 years later. 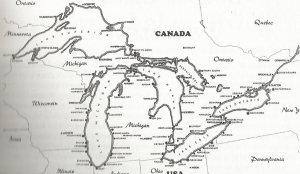 Not all of the lakes’ treasured coal was salvaged. In 1910, the steamer, LANGHAM, caught fire in Bete Grise Bay, Lake Superior, and sank with no losses except for a large cargo of coal. Neff Shipping Company from Milwaukee sent a tugboat and a barge hundreds of miles to the Northern Michigan wreck site, but fierce storms forced the crews to quit after a brief attempt at salvage.

Cargo vessels have sailed the Great Lakes for more than 300 years. While Caribbean divers were searching for gold doubloons from Spanish galleons, the fresh water salvors were searching for something more practical—resources used in home and industry. But no matter what they retrieved: new cars, whiskey, even crates of cheese, King Coal remained the most coveted prize of all.