Wes Hall, a member of the Clive Cussler dive team that found the Confederate submarine H.L. Hunley, died Monday. He was 59.

Hall, who grew up in Kansas, earned his master’s degree in maritime history after retiring from the U.S. Marine Corps. He started his own archaeological survey company, Mid-Atlantic Technology and Environmental Research, based in North Carolina. It was a love of history and diving cultivated in Charleston that set him on his path.

His friends remembered him Wednesday as a smart, easygoing guy who was a talented professional yet modest about his accomplishments.

“I never saw Wes without a smile on his face,” said Cussler, the bestselling author and founder of the National Underwater and Marine Agency. “Nothing fazed him. He could swim through a swamp filled with alligators during a force 10 hurricane, then walk in to a bar and order a glass of water with a napkin. The man who identified the Hunley, I know Wes has now discovered all the shipwrecks he and I and Ralph Wilbanks ever searched for.”

Hall often worked with Wilbanks, a Charleston area maritime archaeologist, who led Cussler’s 1995 Hunley expedition. Wilbanks was diving with Hall for another project on Monday.

“He was a really great field underwater archaeologist,” Wilbanks said. “Wes was the guy who figured out how to do things. He could see things with his hands.”

Hours after the Monday dive, Hall suffered a heart attack in his home. 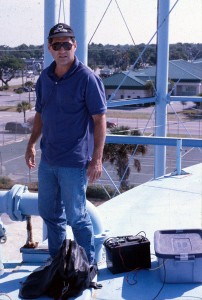 Hall is most famous in Hunley circles for being the first man to positively identify the Hunley. On May 3, 1995, Hall, Wilbanks and local archaeologist Harry Pecorelli were surveying sites previously identified by a past Cussler NUMA expedition.

Pecorelli initially dived on a site about a quarter-mile farther out to sea than the wreck of the USS Housatonic, the ship the Hunley sank in 1864. He returned to the surface only to proclaim, “I don’t know what it is, but it’s not the Hunley.”

Hall followed Pecorelli down to the site, and began to feel his way along the parts of the object that had been exposed. As a perplexed Pecorelli looked on, Hall wrapped his arms around the sub’s conning tower and hugged it.

“It’s the Hunley. That’s it. That’s all it can be,” Hall said when he surfaced.

Warren Lasch, former chairman of Friends of the Hunley, called Hall “a gentleman.”

“He was a very, very good man,” Lasch said. “He always had a positive, uplifting personality.”

Wesley Keith Hall is survived by his wife, two stepsons and his parents. A memorial service will be held Friday at 5:30 p.m. at Carolina Marine Terminal in Wilmington. In lieu of flowers, the family asks that contributions be made in his name to the American Heart Association, P.O. Box 5216, Glen Allen, VA 23058-5216 or NUMA, P.O. Box 5059, Scottsdale, AZ 85258.

From The Post and Courier –  Diver, historian who identified Hunley dies