by J. A. Hitchcock 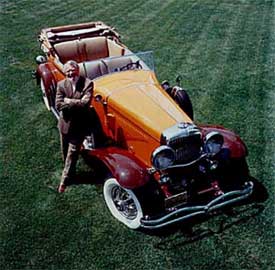 Clive Cussler next to one of his favorite classic cars, a 1929 Model J Dusenberg, featured on the back cover of FLOOD TIDE (©1997).

Come on, admit it – do you know who Clive Cussler is? How about Dirk Pitt? How about NUMA? I thought so. With over 16 novels to his credit, Clive Cussler should be as popular as Tom Clancy and John Grisham… but he’s not. So read our exclusive EON interview with the author who should be more famous.

After gushing about how much I enjoy his books (yes, I’ve read every one of them and loved them all), Clive Cussler gushed right back that he loved the fact that I gave ATLANTIS FOUND, his most recent book, such a nice review. It’s always good when you hit it off with the person you’re interviewing.

We began talking about ATLANTIS FOUND and how he ever came up with the idea for the book.

“Everything starts with a ‘what if’ concept,” Cussler explains. “What if we find Atlantis, you know, it’s just kind of wild. The more I got into it, I thought it’d be great fun to just make up my own Atlantis, because I think that’s what Plato did, and there it is. I mean, he might have used the big volcanic explosion that destroyed Crete there on Santorini, that could have been the basis of it, but there’s certainly no big continent out in the middle of the Atlantic.”

So there. But what about the tie to World War II, Hitler and a secret base way up north?

“I ran across a bunch of material and a book written by this German and this British Intelligence Officer about actually surveying Antarctica before the war,” he says. “They claimed that they did hide all this stuff (in ATLANTIS FOUND) there after the war. There was always this mystery about these submarines, because they didn’t show up in Argentina until after the surrender and everything, so I threw that in along with the comets” — he laughs again — “and everything but the kitchen sink.” 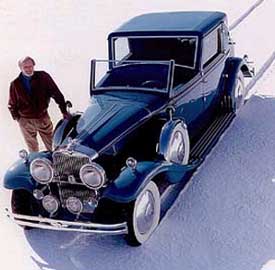 Let’s go back a few years — 30 to be exact — to the creation of Dirk Pitt (the main character in all the Cussler novels) and the books.

“My son’s name is Dirk and I was looking for a good, tough name and there it was,” Cussler says. “He was only 6 years old when I started writing [in 1965] and I was working in advertising at the time as a copy and creative director for an agency in Los Angeles. My wife would go through cycles where she would get bored and would get a job when the kids were in school, then she’d get bored with that and stay home for a while.

“So, she found this job working evenings at the local police department as a dispatcher, clerk, that kind of thing,” he continues. “We’d see each other for about an hour and a half before she had to go to work, then I’d fix dinner for the kids and play with them, then put them to bed by 8:30. I didn’t have anyone to talk to and I thought, ‘Gee, I’ll write a book’.”

As simple as that. But what would he write about? Cussler didn’t have that “great American novel” inside of him, but he thought it might be fun to do a paperback series of adventure, mystery, intrigue. So he began researching what was out there, from Edgar Allan Poe’s “Inspector Dupont” to James Bond, Travis McGee and Sherlock Holmes.

But then he began to wonder how he could make his book and character different.

“Then it hit me – I’ll take my hero and put him in and around water, because I’d been scuba diving for years and I thought it’d be a great backdrop,” Cussler exclaims. And that’s how Dirk Pitt was born. 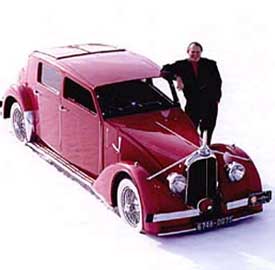 What most people don’t know is that the first book of the Dirk Pitt series was PACIFIC VORTEX, even though it was actually published later. This is where Cussler introduced all the characters, setting the action in Hawaii and telling the story of this evil old guy who lived under the sea. Long story short, Pitt fell in love with the guy’s daughter and she was killed. Then throughout all the books, sometimes this long-lost love is mentioned — gotta have that romance factor! The real-life Dirk still remembers that period of his life vividly – Cussler’s desk and typewriter were in his room and he’d fall asleep to his dad pounding away on the typewriter.

“I sent PACIFIC VORTEX out and kept getting rejections,” Cussler recalls. “In the meantime, I began writing the second book, and finished it in 1969, then found an agent, Peter Lampac of William Morris. He tried to get me published, but couldn’t and after a couple of years even his bosses said to dump me because it wasn’t going anywhere. Peter hung in and I finally got published in 1973.”

This was just a little paperback of THE MEDITERRANEAN CAPER (actually the second book in the series), then a hardcover of ICEBERG was published, but only 5,000 copies were printed, of which 3,200 were sold. Today, a first edition of ICEBERG has been known to sell for as much as $1,000. Then came RAISE THE TITANIC, which turned out to be Cussler’s breakthrough book (spawning a movie adaptation), and people congratulated him on his “overnight success.”

But with this success, fame did not come. At least, he did not become “famous” with his name in the media eye and known in every household. 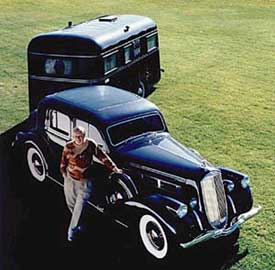 Ready to travel on his next trip, Cussler and his 1936 Pierce-Arrow & Travelodge Trailer, featured on the back cover of INCA GOLD (©1994).

“Everybody’s always mentioned that and you know, I don’t know why,” Cussler marvels. “I guess I’ve never pushed that hard and Carole [Bartholomeaux, his publicist] is amazed I’m not better known because Stephen King just writes, he isn’t looking for shipwrecks or collecting classic cars and all the rest of it like me. After 30 years, I guess it is kind of strange, but it’s fine by me.”

But it is a shame, and brings us to the question: Are you ever going to do another movie based on one of your books? I can almost hear Cussler cringe.

“Well,” he begins slowly, “I took the books off the market – it’s been over 20 years – because RAISE THE TITANIC was such a disaster. I mean, what made me mad about it wasn’t the fact it was a bomb, but the screenwriting was awful, the direction was bad, even the editing was just pathetic. The quality of the production was just junk. So I always said I would never sell again unless I had cast approval and script approval, and of course, Hollywood doesn’t want to give that. But they have been pounding on my door for years – actors, too, who particularly want to play Dirk Pitt.”

Actors pounding on his door? And who would that be? But Cussler doesn’t want to answer that just yet.

“I don’t feel any of the ones who have come looking would fit the role of Dirk Pitt,” he admits. “I’d like to see somebody who’s not well known play him. You know, Sean Connery – nobody knew who he was when he played James Bond and he became James Bond. If you get a Bruce Willis or Harrison Ford, you don’t see Dirk Pitt, you see them. They’ve talked about George Clooney and Matthew McConaughey (who’s been to Cussler’s house twice), who’s not too bad. He’s a little short, and he doesn’t have green eyes, but that can be taken care of with contacts.”

However, Cussler still doesn’t sound convinced, and he wouldn’t comment on my suggestions (which I listed at the end of my book review – Sam Neill or Timothy Dalton. So if Cussler had his choice, script and actor approval, which book would be a movie?

“My choice would be INCA GOLD, but apparently the one they’re doing the screenplay on now is SAHARA,” he says. “I’ve gone through the screenplay and made suggestions on it and it’s all right…so far.” 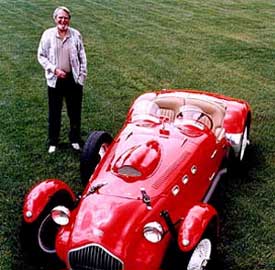 James Dean has nothing on Cussler and his 1953 Allard, featured on the back cover of SHOCKWAVE (©1996).

Now, you may be asking yourself, what the heck was the NUMA mentioned at the beginning of this interview? NUMA is the National Underwater & Marine Agency, the fictional organization created by Cussler that Pitt and his cronies work for and that always gets involved in Pitt’s adventures, whether NUMA wants to or not. Most people don’t know that NUMA is also a real-life organization formed in 1978.

“I was looking for the John Paul Jones wreck, the Bonhomme Richard in the North Sea,” Cussler explains. “It was suggested that because I was coming up with the money to fund the expedition, I should form a non-profit foundation. One of our volunteers was an attorney from Austin, Texas, so he set it all up. I had some really big trustees on this thing and they insisted we call it NUMA, like the one in my books. I wasn’t keen on it, but they outvoted me,” he laughs, “I wasn’t really thinking commercially, but they thought it’d be great fun, so I guess, Virginia, there really is a NUMA.”

Looking for shipwrecks around the world, Cussler has found many thought to be lost forever. One of the most recent was the Confederate submarine Hunley, the first to sink a warship off Charleston during the Civil War. When found buried three feet down, a port was broken and they found that silt had filled the submarine, which means the bones of the crew may be intact. In July, the Hunley will be raised and yes, Cussler will be there.

The most recent wreck NUMA has found was this past December: the Carpathia, the ship that rescued the Titanic survivors, which was torpedoed six years later in World War I. They managed to get a camera down to film some of the wreck, but the weather beat them out, so they’re returning in April 2000. 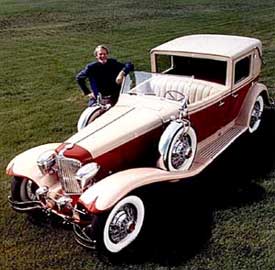 Cussler stepping out in style with his Cord L-29, featured on the back cover of TREASURE (©1988).

If you think that doesn’t keep him busy, ask Cussler about his classic car collection and the coffee table book about classic cars he’s planning for a December release (just in time for Christmas!). With 87 cars in his collection, his favorites are a 1929 Dusenberg (“the epitome of a classic car,” he enthuses) and a 1948 Talbot Lago (“beautiful, it’s gorgeous.”) One of his classic cars is always featured on the back cover of his books, with him standing next to it, looking like the contented author he is.

So what’s next for Cussler?

“In the next book, Pitt discovers Captain Nemo’s Nautilus, although I still have a long way to go in fleshing out the plot,” he reveals. “And NUMA heads to Fire Island, New York this summer, where the Savannah, the first steamboat to cross the Atlantic, is buried in the sand.” Cussler says he’d die happy if he could just find the Bonhomme Richard, John Paul Jones’ ship – the one that started NUMA. He’s gone looking for it three times and plans to give it another go this year.

Maybe that will be Dirk Pitt’s next adventure.

(Used with permission of the author, this article appeared in the April 17, 2000 issue of Mothership)