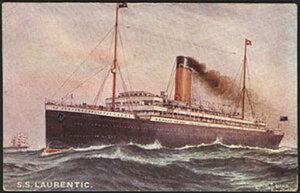 The SS Laurentic was one of the White Star Line’s luxurious passenger ships for eight years before going to war.. Credit: National Archives

When a British troop and cargo transport struck two mines off the Irish coast during WWI, United Kingdom Royal Navy warships converged on the site and never left. Onlookers were curious. The war was three years running and this wasn’t the first time Allied vessels had been struck by a torpedo or hit by a mine laid down by German U-boats. The strike was January 21, 1917 and America didn’t enter the war until two and a half months later. But that didn’t prevent the U.S. from sending munitions and other supplies to the British cause, which it had done for years. In return, the U.S. received payment in gold bars or silver specie.

Why all the fuss? Yes, this was a sad loss. The SS Laurentic was one of the original White Star Lines passenger ships launched in 1908 and converted to a troop transport during the war. It was carrying troops and serving as an auxiliary cargo cruiser when the German submarine U-80 successfully launched its mines. Sadly, 354 men out of the 745 aboard were lost as the vessel sank fast after suffering the hits. There was no time to salvage the strong boxes stored below decks in the second class baggage room. That’s what the fuss was all about. The cat was out of the bag when an anonymous tip to the newspapers revealed that 43 tons of gold worth $5 million British pounds was aboard ship. 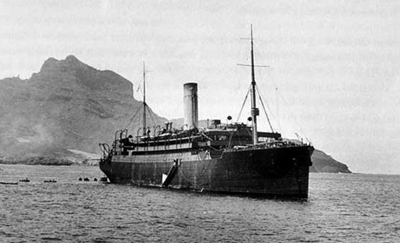 “Get Guy and Dusty” was the order from naval headquarters after the gold story leaked out. Renowned hard hat diver Capt. Guyton Damant was ordered to report immediately to the dive site and to bring as many other divers as needed. Damant immediately called for “Dusty” Miller and crew, known as the “tin can openers” from having broken through sunken German subs to salvage their code books. An interesting side story was a call by Damant to Petty Officer Augustus Dent inviting him to join the salvage team. Dent, a certified deep sea diver, was a Laurentic survivor and pleased to return to his ship and help with the salvage. Everything was top priority. They got the hurry up from the British who were fearful that aid from the U.S. would dry up now that the gold was resting in the deep. It wasn’t simply a monetary loss. The bullion was needed to back up the purchasing power of the British pound. 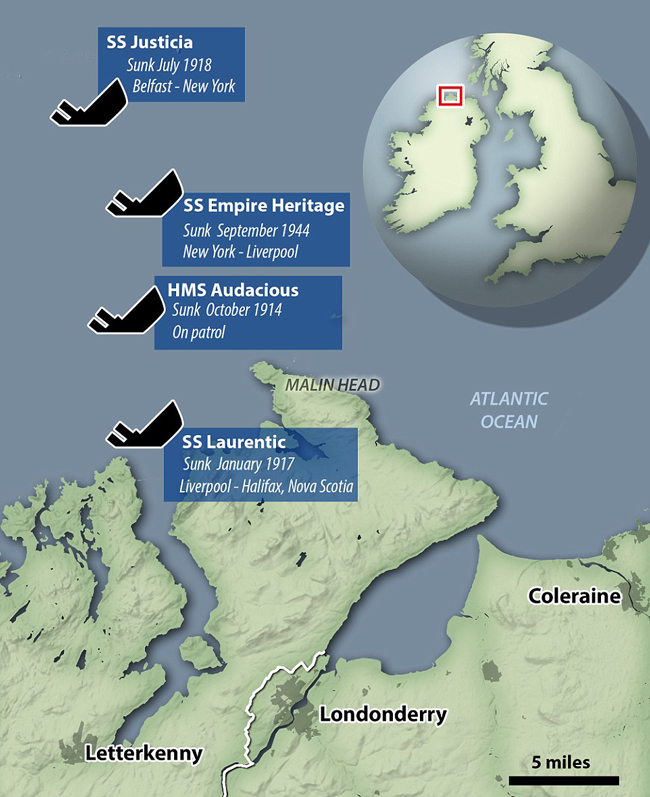 Map shows location of SS Laurentic and lists some of the ports it visited. Credit: Lough Swilly Tourism Center

On the 14th day of the search, after cutting and blasting into the strongbox room, Miller bashed in a steel door with his sledgehammer and came face to face with stacks of boxes weighing 140 pounds each. Despite the ship’s 60 degree list to the port side, he strong-armed one box to the deck, and then returned for more. He spent 60 minutes at 115 feet and although diving safeguards were taken, he still got the bends. He had over-extended the workload, but a series of northerly gales may have saved his life. Diving was suspended amid winds and heavy seas. Miller’s time in the decompression chamber plus additional rest enabled him to resume diving when the storms subsided. 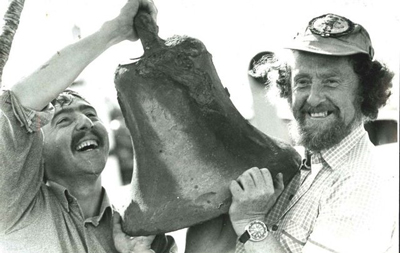 Navy divers continued to work the wreck from 1917 to 1919 recovering 859 gold bars. Some of the boxes had broken open, toppling loose bars to the sandy bottom. By 1924, Damant and his crew retrieved 3,189 of the 3,211 bars listed on the ship’s manifest. The rest, 22 all told, were lost in the massive clutter of broken beams and caved in decks created by stormy seas.

In 1930, a British salvage company found three bars in a lengthy, expensive search. In 1969, while helping organize scuba diving clubs in Derry and Donegal, the late Ray Cossum and his brother Eric became exuberant over the Laurentic and approached the Irish government for approval to dive it. After two years of negotiations, the brothers bought the rights to the wreck and divers needed to go to them for permits. Permits are now issued by the Department of Tourism. A Dutch company searched the site in 1980, but came up empty handed. 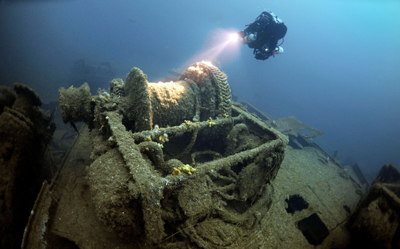 Located three miles off Lough Swilly, Donegal, Ireland, the wreck lies in 95 to 130 feet of water. The seas can muster up a storm in short order, while shifting currents sweep through the remains of the wreck’s five collapsed decks. Experienced tech divers carry additional air in side-mounted tanks, while breathing a special gas that provides them with additional bottom time and less decompression stops. Although visibility is fair, underwater lights are necessary to brighten cracks and crevices created by the collapsed superstructure.

The recovery of the bars is to this day the largest in weight of a sunken gold hoard. Joseph A. Williams, in his book, Sunken Gold, says, “What Capt. Damant and his team achieved was remarkable. The salvaged gold would equate to $2.477 billion in today’s market.”