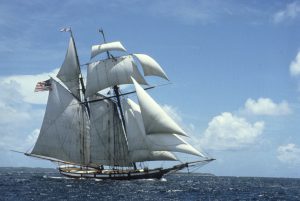 On May 14, 2016, friends of the Pride of Baltimore gathered at Fort McHenry National Monument and Historic Shrine to memorialize the sinking of the schooner and loss of its captain and three crew 30 years ago. The seaworthy vessel—a replica of an 1800s Baltimore Clipper—was struck suddenly by a wind microburst while sailing 240 miles north of Puerto Rico. Cyclonic winds of up to 80 mph rolled the ship on its port side where it remained for less than a minute before plunging beneath the waves.

At the gathering, Helen Bentley, former member of the U.S. House of Representativ es, remembered a call she received in her office at the Capitol from Baltimore Mayor William Donald Schaefer. “He was crying,” she said, “when he blurted, ‘We’ve lost her! We’ve lost her!’ I asked who it was we lost and he said, ‘Our ship, the Pride, it’s gone. It sank in the Bermuda Triangle.’” 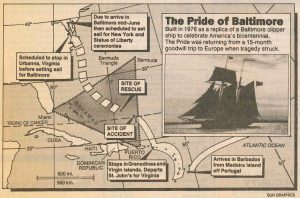 Built to historical standards for the American Bicentennial of 1976 and launched in 1977, the 90-foot-long two-masted, topsail schooner was just like the sleek cargo carriers that plied the seas before steam. As Maryland’s flagship and goodwill ambassador, she promoted business and tourism, becoming one of the most successful public relations enterprises for the city and state. People gathered wherever the ship docked: on both coasts of the U.S., the Great Lakes, Bermuda, the Caribbean islands and Europe. She covered over 150,000 miles “extending the hand of friendship” to people throughout the world. 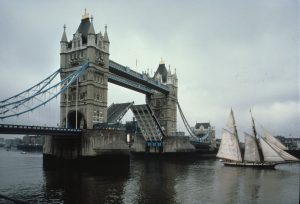 Upon visiting more than 100 ports in nine years, sustaining a deluge of sudden squalls, the captain and 12 crew prepared for another typical thunderstorm at sea. As blue skies turned gray amid a sporadic light rain, the crew double-reefed the main sail, kept a full fore-staysail and furled the others. When raging gusts suddenly replaced prevailing winds, there was no time to turn the vessel into the maelstrom. It was hit by a microburst, one of the most feared and least understood weather systems that plague ships at sea. One of the survivors described it as “a wall of mist that whisked us over.” The manually activated EPIRBs (Emergency Position Indicating Radio Beam) used to alert search and rescue teams could not be reached in time as the survivors scrambled into a small life raft. Eight of them were adrift at sea for four days before being rescued at night by the passing Norwegian tanker, Toro Horten whose lookout spotted Robert Foster’s blinking flashlight.

Foster spoke at the gathering, recalling the camaraderie of the crew.” We were young people taking a pause in our lives, “he said, “and the boat meant so much to us. There was closeness among us and we were surprised and heartened by the attention and interest we received after the tragedy. To this day I’m so thankful the captain of the Norwegian ship spotted my S.O.S. and didn’t dismiss it as the flickering light from a fishing buoy gone adrift.” 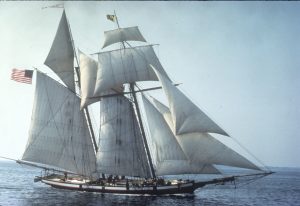 After the formal remarks and singing of the “Pride of Baltimore,” the survivors in attendance rowed a wooden boat into the middle of Baltimore Harbor and dropped floral wreaths to commemorate their lost shipmates. A city fireboat and accompanying tug shot plumes of water into the air as a salute. The Pride of Baltimore II, a vessel built to replace the original one, was anchored nearby and discharged its cannon as a final salute.

Jan Miles, a former captain who serves for the Pride’s non-profit organization, sat on the deck of the replacement vessel and reminisced about the passage of time since the tragedy. “The Pride’s legacy has a life of its own,”’ he said, “that remains emotional, honorable and honest.”